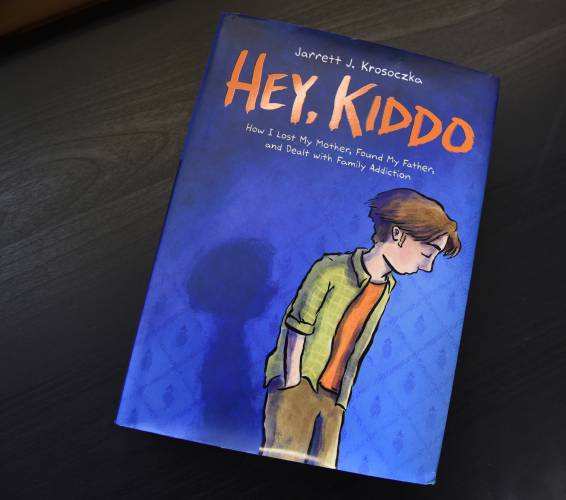 Hey Kiddo is a graphic memoir written by Jarrett J. Krosoczka. I really enjoyed the book and found the story very touching. Since his father was a mystery and his mother a drug addict, Jarrett was forced to move to his maternal grandparents’ house.

This sudden change had a profound impact on Jarrett and he longed for a life with his real parents. However, his grandfather treated him like his own son. Jarrett longed to be with his mother but she rarely came for any special occasion including his birthday celebrations. Soon enough, he learnt about his mother’s addiction and he was further angered with her.

Art and drawing were a way for him to escape his reality. His grandfather really pushed and encouraged his in-built talent. He played a major role into how it has turned it into his career today.

Out of the blue, he gets a letter from his father and finally meets him. Initially, he was extremely displeased with his father for not being around while he was growing up. Upon meeting his half brother and sister he finds a family in them and he eventually comes around.

The book is extremely moving and interesting. It is super short and crisp. Even though it may be a graphic novel the amount of emotion the author has been able to convey in the book is truly spectacular. The journey of a child whose parents have not seen their own son’s childhood certainly has had a great impact on him. I enjoyed this book and think that it is a must-read for everyone.