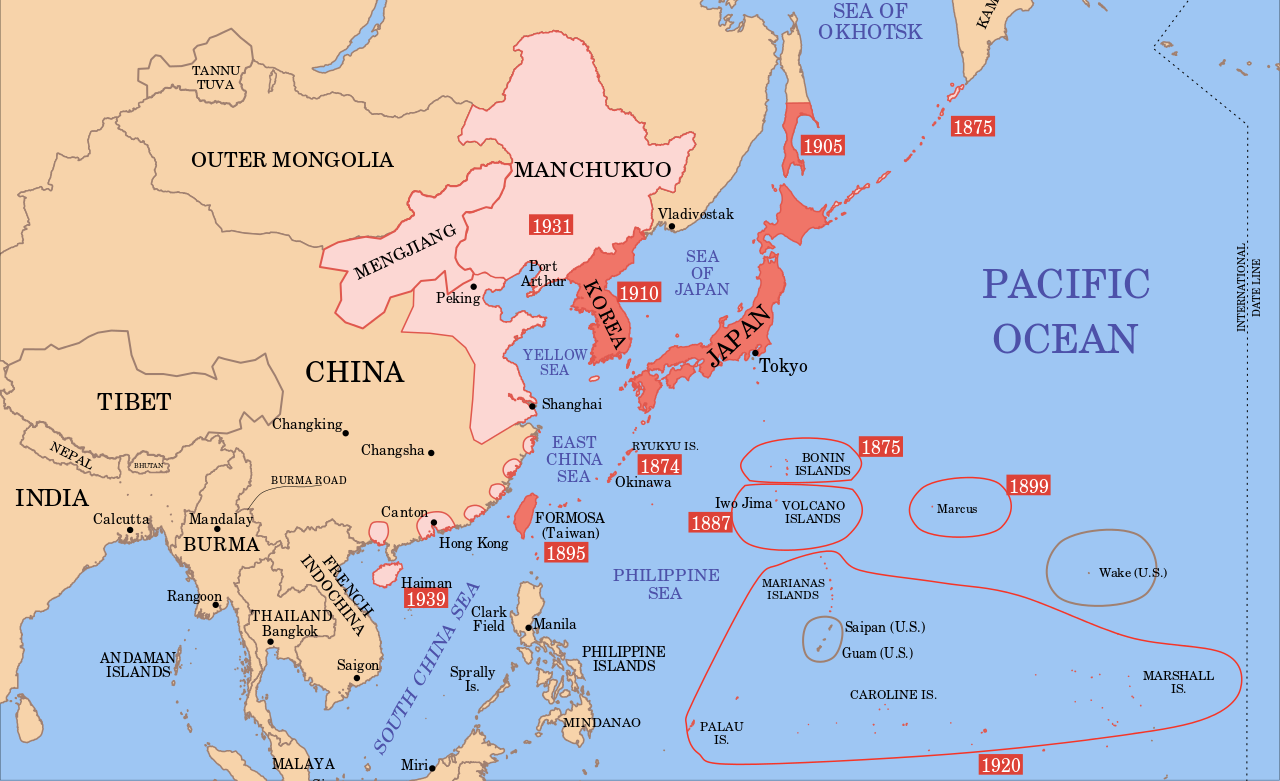 Today, Japan is the fifth most peaceful country in the world…

The Korean Peninsula was rich in coal and iron resources whereas Japan was not particularly rich in natural resources. If Korea was conquered by any Western Nation, it would be a huge threat to Japan. Korea was also a tributary state to China. In 1894, when China sent troops to Korea to put down a rebellion without informing Japan, it went against a previously signed treaty. So, the Japanese sent their troops too which led to the First Sino-Japanese War in which China lost badly.

This was the start of Japan’s colonial empire and rivalry with the Russians for control over Korea and Manchuria. This ended in the Russo-Japanese War between 1904-1905; which Japan won.
This gave Japan substantial rights in Manchuria, specially over rail roads.

After WWI, Japan still feared losing everything to China and invaded Manchuria again in 1931 and continued with series of border clashes. These events lead to the Marcopolo Bridge Incident and the full blown Sino-Japanese war in 1937.

This war pushed the Japanese economy and military along with its supplies of rubber, iron, and oil to the limit. Japan tried to get the resources from Siberia but was forced to abandon that idea due to the disastrous Battle of Khalkin Gol in 1939. By this time, the south Pacific had already been colonised. So with the simultaneous attacks on Pearl Harbour, Singapore, Hong Kong, the Phillipines, and Malaya, they wanted the British and the Americans to overlook their scramble for rubber and oil.
But they completely misread the reaction of the Americans to the Pearl Harbour Incident. The reaction was 90 years in the making and lead to the disastrous bombings of Hiroshima and Nagasaki.

In August, 1945, the last nail in the coffin was driven with the bombings in Hiroshima and Nagasaki. After this incident, having lost countless lives, Japan’s economy and resources spiralled downwards. After this started the tedious nation building activity which systemically and tirelessly continued and is evident in Japan’s progress today. After World War II, the Japanese people showcased the greatest reformation recorded in modern history and redeveloped themselves in almost around 90 years. Let’s take a look at how it evolved to the kind of nation it is today after World War II.

Japan has repeatedly expressed the feelings of deep remorse and heartfelt apology for its actions during the wars. On its 75th anniversary as a peace loving nation, Japan remains determined never to deviate from its steadfast course of peace. Following World War II, Japan has till date consistently followed the path of a peace-loving nation, achieving peace and stability in the Asia-Pacific region as well as the international community. Aiming to achieve a nuclear-free world, Japan has submitted draft resolutions on nuclear disarmament to the United Nations General Assembly (UNGA). It is also lobbying for the Comprehensive Nuclear-test Ban Treaty (CTBT). Japan has taken into consideration a wide variety of issues globally including poverty, climate change, disaster risk reduction, water and sanitation, environment issues, women’s issues, agriculture, health and education among many others.

Now Japan is the largest and most developed economies in the world and also one of the biggest consumer markets in the world!