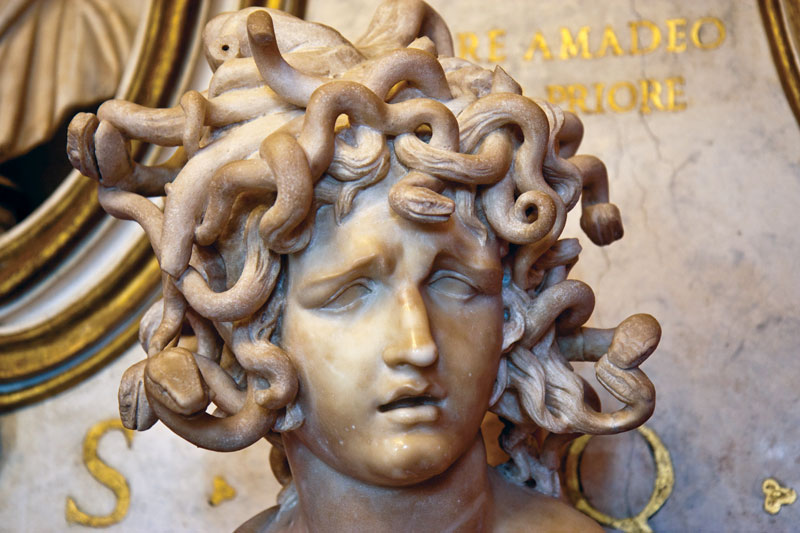 Many of you have heard of Medusa in Greek mythology. She is widely known because she is a winged female having live poisonous snakes in place of hair on her head, and eyes when looked into, can turn one into stone. But how did this terrible fate befall her?

She was the only mortal of three daughters of Phorcys (the sea-god of hidden dangers in the sea) and Ceto (goddess of the dangers of sea, sea monsters, sharks and whales). She, and her immortal sisters Stheno and Euryale, were known as the Gorgon sisters.

She was a beautiful maiden, and word of her appearance spread far and wide. She took a vow of celibacy and trained to become a priestess for Athena (Greek Goddess of Wisdom). It is said that one day, Medusa’s beauty caught the eye of Poseidon (Greek God of the Sea). He had a feud with Athena and took to acquiring her priestess as a form of revenge. He tried approaching her many times, but Medusa, keeping her vow to Athena, rejected his advances. After many failed attempts, Poseidon lost his patience and raped her in Athena’s temple. She pleaded for help from Athena, but none came. Only later did Athena find out about the atrocity committed in her temple. She was enraged, but instead of punishing Poseidon (for he was a God, and nobody punished the Gods) she cursed Medusa, turning the beautiful woman into a demon. Her stunning locks of hair morphed into live, venomous snakes, and anyone who gazed into her eyes was petrified and turned into stone.

News traveled of what monster the alluring maiden had become, and many warriors sought her out to defeat her and add her to another list of their conquests. However, every none of them returned, having been immortalized into stone after looking into Medusa’s eyes. It seemed that this monster was undefeatable.

Until one day, the mighty warrior Perseus (a demigod- the son of Zeus, the Greek God of the sky and thunder, and Danae, daughter of Acrisius, the king of Argos) was sent by King Polydectes of Seriphus to, bring Medusa’s head to him as a challenge. He wanted Perseus to die so that Polydectes could marry Perseus’ mother (Danae). He was given Hermes’s golden winged sandals, Hades’ helm of invisibility, and Athena’s mirrored shield to aid him in his conquest. By viewing her reflection in the polished shield, Perseus beheaded the Gorgon, and from her neck sprang Chrysaor (the warrior with a golden sword) and Pegasus (the winged horse). Her head was then fixed to Athena’s shield. Even when she was dead, the power of her gaze was so terrifying that it would turn Athena’s opponents to stone in battle.

Medusa has been depicted as a symbol of fertility as well as one of protection. Many artists such as Leonardo da Vinci, Salvador Dali, Auguste Rodin, Pablo Picasso, etc. have been inspired by her story. The symbol of famous designer Versace uses Medusa’s head as a symbol of beauty and art.

Medusa has been known through time only for her petrifying gaze and monstrous hair, but, as always, there is more than one side to every story.