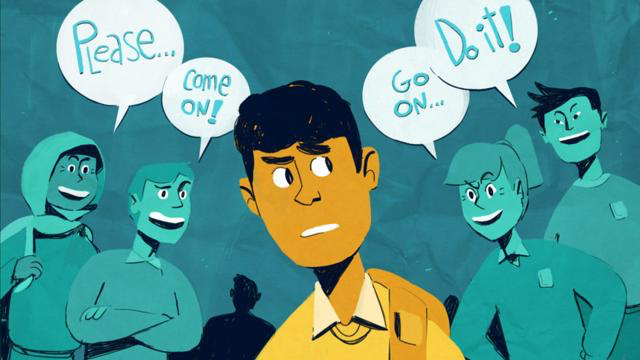 It is often that an individual makes erroneous decisions. When their veracious peers interfere, it becomes intensely arduous to make correct decisions. Peer pressure is the influence one encounters from a person which an individual would not otherwise consider doing. Besides being an affectionate companion, a peer could simply be a schoolmate or even a family member.

Peer pressure can have both beneficial as well as pessimistic repercussions. Most teenagers give in to peer pressure because they want to be fancied at or imagining that their friends would ridicule or scorn them for not mingling with the other members of the group. Others could be inquisitive in the tasks and endeavours of their friends. The perception that everybody is doing the same thing may invoke interest amongst others and might compel them to leave their better judgement behind. In this vulnerable age, adolescents do not comprehend the fact that they are ruining their lives by giving in to peer pressure. Peer pressure leads to loss of individuality and integrity. As one tries to imitate others, they fail to think rationally. It leads to loss of instincts and tastes in various fields like fashion, sports and music. A child who aspires to become a cricketer might kick the football with his friends surrounding him. Gradually one forgets his way of lifestyle and loses his originality. At gradual stages, boys and girls are unable to choose friends wisely and land up making friends who are wicked and immoral. Sudden changes occur in behaviour and conduct among students. Certain boys and girls develop worse habits like stealing and cheating. As a result, such ill manners are instilled into others and they are motivated and convinced to perform a sin. Adolescents belonging to affluent families develop habits like smoking, drinking and gambling when they come in contact with such malicious comrades. This is perhaps the greatest negative aspect of peer pressure as it may lead to loss of both health and life. In India, a major negative effect of peer pressure is attempting suicides. Hundreds of college-goers and even high school students have been reported to have committed suicides because of their peers.

Many a time, it is not only about pressure but an inspiration which may end up giving significant changes. If an individual is fortunate enough to get a good peer group, his/her bosom friends might influence him/her to inculcate virtues and decent manners. One’s peers might help others to mature and be a self – reliant and sanguine person. They might encourage and support their friends who are capable in any field so that may embrace success. Peer pressure, moreover, helps us become more competitive, a significant requisite in the modern era. Man is a social animal, therefore, peer pressure is bound to affect the person in one way or the other. It allows people to get exposed to new ideas and technology prevalent in the surroundings.

So it’s all about the nature of the peer group according to which an individual would face the consequences. The effect on peer pressure on decision making is well established from both academic and practical scenarios. It is impossible to go through our lives without being influenced in one way or the other. So we have to guard ourselves to stand firm and make choices based on what we want and what is right.