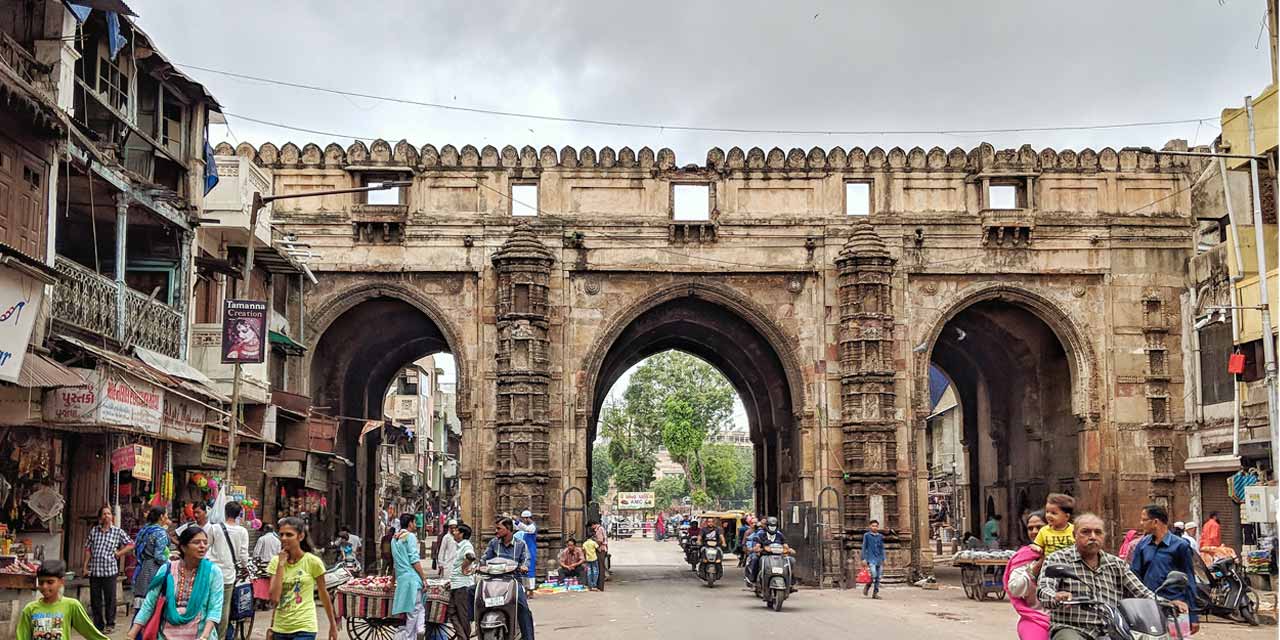 After a 36-hour train journey, my family and I finally got down at Baroda, the third-largest city in Gujarat. We stayed there for a day and drove to Ahmedabad after visiting Anand. We went for a heritage walk around the city. One of the destinations that caught my attention was The Teen Darwaza.

It was built by the founder of the city, Sultan Ahmed Shah, in the year 1415 A.D. It is the longest and oldest gateway in the city. This marvel was completed after 4 years (1411-1415). It is a triple-arched gateway and guards the eastern entrance of yet another beautiful monument, the Bhadra Fort. It served as an exit gate. It is surrounded by many other heritage sites, monuments and by eat-outs. The intricately carved walls are a view to behold!

The windows of this wonderful monument are semi-circular in shape. Five palm trees, which are covered with snakes, are shown.

It is said that the renowned Mughal emperor Jahangir used to come here with his wife, Noor Jahan, to take a look at the procession that started from this spectacular gateway and went all the way till Jama Masjid. It provided access to the Royal Square, which was then called Maidan Shahi.

The Maratha governor, Chimnaji Raghunath, decreed and inscribed Farman on Teen Darwaza in the year 1812, declaring equal rights for women in the inheritance of ancestral property. It reads: ”Let the daughter get her due share of fathers property without any hitch. So is Lord Vishwanath’s command. If you defy, the Hindu will have to answer Mahadev and the Mussalman will have to explain to Allah or Rasool.” It was inscribed in the Devanagari script.

The legend of the Eternal Lamp

As we walked through the central opening, which is 17 feet wide, we were acquainted with a gentleman. He was standing near a diya (lamp). On asking why the diya was there, he narrated a beautiful legend which amazes me, even to this day!

Long ago, Lakshmi, the Hindu Goddess of wealth, came to this gate to leave the city at night. The watchman who was guarding the gate at that time, Khwaja Siddique Kotwal recognized her and upon hearing her request, asked her to not leave the fort (Bhadra Fort) until he got permission from the king (Ahmed Shah). He then went to the king’s court and beheaded himself. He did so as he thought if the Goddess left the city, it would lose its prosperity and become abandoned. It is believed that Goddess Lakshmi still resides in the city! There is a tomb dedicated to Kotwal Siddique.

I stood there perplexed as I listened. He went on to tell that the lamp I mentioned earlier, has been lit for over 600 hundred years and is taken care of by a local Muslim family. I was even more astounded when I heard this!