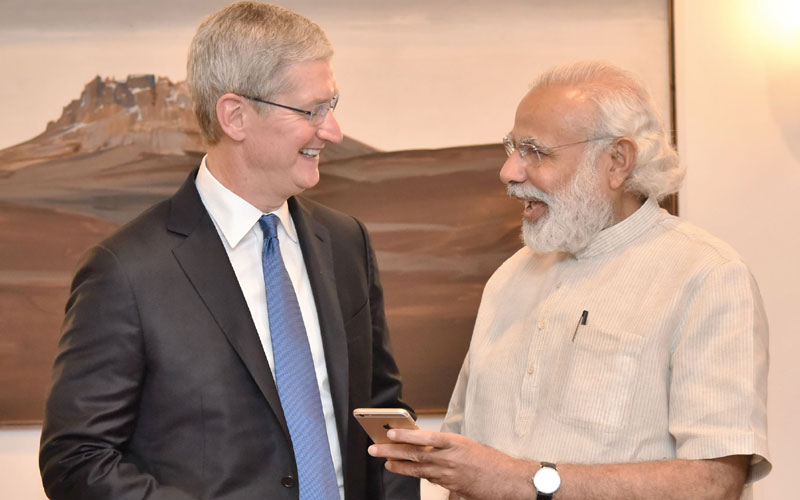 Apple is the world’s largest company in the world recently hitting the 2 trillion-dollar mark on the NASDAQ stock exchange. They have built a formidable presence in both the US and the UK. But both these countries do not have that large of a population and not that big of a market either. For Apple to expand and make itself bigger, it needs to spread to countries with a much larger market. Apple has realized this and for the past 3-4 years has tried to expand into India. Only 25% of the Indian population has a smartphone and the iPhone accounts for only 1% of the smartphone market. Apple has been trying to capitalize on this and grow in India.

One of the biggest reasons Apple has not done well in India is because its primary product, the iPhone has an exorbitant price. The iPhone is already very expensive in the US and for Indians there is a 20% tariff charged by the government making the iPhone even more expensive. A good example of this is the iPhone 11 Pro which comes in at Rs. 1.14 lakh in India compared to an estimate of Rs. 70,000 ($ 1000) in the US. Considering that 95% of all smartphones in India are under Rs. 35,000, Apple’s flagship models are ultra-premium. The average salary of a person in India is almost the same as the price of an iPhone!

Along with this, Apple’s team in India has been collapsing. In 2018, three high-ranking officials quit and the entire sales team had to be re-organised. But Apple still hadn’t found a way round the tariffs. As we have seen in numerous ads, the Modi government is trying to bolster the Make in India programme and is forcing companies to manufacture their products domestically to employ more people. Samsung and Xiaomi have already set up factories. Only in 2019, did the company start building its iPhone Xs, Xs Max and Xr in India and very recently announced that the iPhone 11 is also going to be manufactured in India.

These are only some of the problems. If you go to Apple’s India website: https://apple.com/in you will see a category on the right of the top bar saying “Where to Buy”. This doesn’t appear on the US website. Every time you try to purchase something from Apple’s India website, they will redirect you to this page which helps people find the nearest place Apple products are being sold. There are no Apple stores in India, not even online! There are only authorised resellers like Unicorn. So, it is almost impossible to directly buy from Apple in India. You can always buy from Amazon but you cannot physically go to an Apple retail store. Apple has done some amazing things with their retail stores in the other parts of the world with fun events like ‘Today at Apple’ where every day they display a cool feature of one of their products. They also have a much nicer experience with a concept of alleyways and interactive stations where you can experience the products. None of these things come to India resulting in very few people knowing what Apple’s products can do.

Another major problem which sprouts from this is the lack of proper support. In foreign countries, Apple is known for having an amazing support team but in India there is no official support. Again, just authorised support providers which do not acquire Apple’s repair or replacement programs. And to top it all, this is exactly how the government wants it to be. According to them, if you aren’t supporting the Indian economy or population, you shouldn’t be successful in the country.

Then the question which arises is: why doesn’t Apple start building its own retail stores. Well, they are limited by government restrictions which require foreign retailers to buy at least 30% of the raw materials from Indian vendors while Apple outsources all the materials to other Asian countries.

To solve many of these problems, Tim Cook came to India in 2016 and spoke to Narendra Modi. Modi refused to budge on the tariffs or give Apple special treatment to build retail stores. And so, the only way Apple could establish a good presence in India would be to manufacture their products and source the materials locally as well. But this would be a huge investment for Apple and they are not quite sure if they want to invest so much money in the country. There is no assurance that the iPhone will still be a successful product without tariffs.

Some people think Apple should build a super budget smartphone to be manufactured and sold exclusively in countries with low-price points which Apple has tried doing. It is unbelievable but the the best-selling iPhone in India is the iPhone 6. In 2017, Apple unofficially relaunched the iPhone 6 in India at a very cheap price of 28,000 rupees. And although the technology is 5 years old it is the only iPhone priced at a competitive price. Rumours say that something similar might happen with the iPhone X (which is now discontinued).

However, there’s a lot more to consider than simply hardware because some of the software features simply don’t exist in India. Apple Maps which has tremendously advanced in the US is practically useless in India. Siri struggles to understand Indian accents and it cannot give you much information about local restaurants or movie theatres. Along with this Apple Pay and Apple News+ have never launched in India.

To succeed, Apple’s strategy in India must be multifaceted. They need to offer a cheaper phone manufactured in India along with creating a prominent position in the country with retail stores to provide a better user experience. And if all the major software features don’t work well in India, it will give their competition the opportunity to make a competitive and more appealing device. But all of that is much easier said than done. It is going to take multiple years of strategic planning for Apple to become a major player in the Indian market.