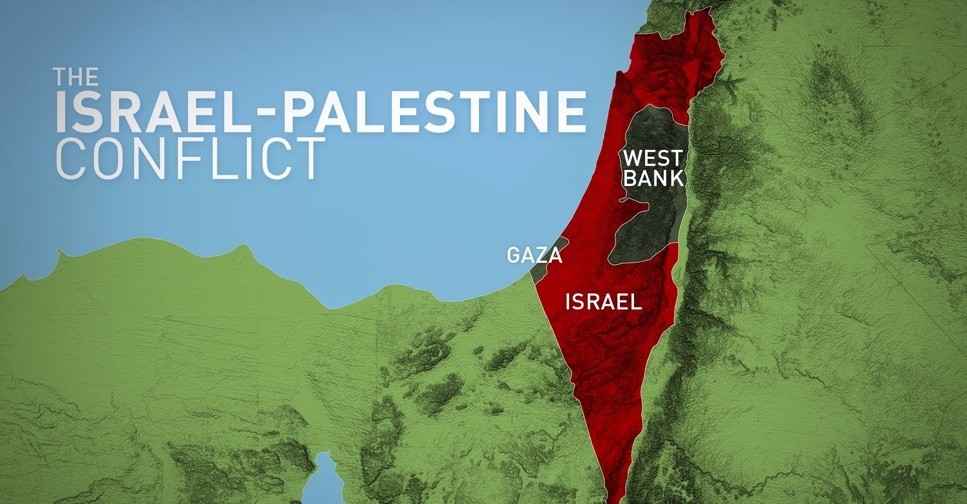 One of the biggest myths around the Israel-Palestine conflict is that it’s been going on for centuries and it is all about ancient religious hatreds. Religion is involved but the conflict is mainly about two groups of people fighting over the same land.

The story goes back only a century, to the 1900s. Then, the region which is currently Israel-Palestine had been under the rule of the Ottoman Empire for centuries. People of different ethnic communities and religions co-existed in peace. They included mostly Muslims and Christians but also some Jews.

However, this was changing in two major ways. The first was that the Arabs in that area started developing an identity of being Palestinian, and wanted a country all for themselves. Around the same time, more and more Jews in Europe were joining a movement called Zionism, which said that Judaism was not only a religion but a nationality and they should form their own country. Having been persecuted for centuries, many Jews thought that creating their own state was the only way to safety. Along with this, Moses, the most important Jewish prophet, had told them about a Promised Land. They found the land in the Middle East, currently known as Israel-Palestine, to be their new homeland. And so towards the end of the 19th century and the beginning of the 20th century, tens of thousands of Jews moved there.

However, in a mere 10 years struck World War I. By the end of World War I the Ottoman Empire had collapsed and the British and French divided the Middle East amongst themselves. The British took control of what it then called the British Mandate for Palestine. At first the British allowed Jewish immigration from Europe. These Jews formed farming communities taking hold of Arab land. This sparked violence among the communities and by the 1930s the British limited Jewish immigration. And so, formed Jewish militants who fought against the local Arabs but also against the colonial British.

Then came World War II and bringing with it the horrible Holocaust. Millions of Jews tried to escape from Nazi rule and fled to British Palestine while collecting a lot of support from the rest of the world for a complete Jewish nation. As violence between Jews and Arabs grew, the newly formed United Nations sought to divide British Palestine into two separate nations: Israel for Jews, and Palestine for Arabs. Jerusalem, where Jews, Muslims and Christians all had holy sites, was to become an international holy zone. This plan aimed to give Jews their state, give Palestinians independence and get the British out of that mess. The Jews accepted the proposal and declared independence as the sovereign nation of Israel.

However, other Islamic states in the region like Egypt, Syria, Iraq and Saudi Arabia saw this as more European colonialism and declared war on Israel. A bloody battle took place in 1948-49 and eventually the Israelis were victorious. But in this process, Israel pushed well past its borders with Palestine and got much of their territory. Israel expelled huge numbers of Palestinians from their homes, forcing them to flee to neighbouring Egypt, Syria and Saudi Arabia. Their descendants now amass to close to 7 million people. The Palestinians were now divided between the West Bank, controlled by Jordan in the East, and Gaza controlled by Egypt in the West. This marked the beginning of the decades-long conflict between the Arabs and Jews.

But close to 20 years later something happened which transformed the conflict. In 1967, came the Six-Day War where Israel and the neighbouring Arab states fought yet again. Israel was victorious and had captured a lot of eastern Egypt, the Golan Heights from Syria and the whole of Palestine. And so, Israel was now responsible for governing the Palestinians, a group of people it had fought for decades.

In 1978, Israel and Egypt signed the US brokered Camp David Accords and Israel gave Egypt back its territory. This was very controversial among the other Arab countries and Egyptian President Anwar Sadat was assassinated because of this treaty.

Soon, other Arab states made peace with Israel, even though they never signed formal peace treaties. But Israel was still occupying the Palestian territory and now the conflict had become wholly between Israel and Palestine. The Palestinian Liberation Organisation (PLO) which had formed in the 1960s fought hard against Israel to get back their lost territory but also claimed the rest of Israel. This fight between Israel and the PLO went on for years. However, the Israeli invasion of Lebanon kicked the group out of Lebanon’s capital, Beirut, dismantling much of what was left of the PLO.

But as all this was happening, something big was changing in Israeli occupied Palestine. Israeli civilians were moving into Palestinian territory. This was not only to help suppress the Palestinians but also because house prices were much cheaper. These settlers were followed by soldiers to guard them along the way. They forced Palestinians out of their homes creating strongly divided communities. This made it much tougher for Palestinians to get their own nation. Today there are several hundred thousand settlers in this region even though internationally they are considered illegal. By the late 1980s, the Palestinians revolted resulting in the first Intifada, which is an Arab word for uprising. It began with protests which turned into violence. Israel responded with heavy force killing a thousand Palestinians.

By the end of the Intifada, it became clear that Israel and Palestine need to end the conflict as soon as possible. Leaders from both sides signed the much-needed Oslo Accords. This is the first big step Israel has taken to withdraw from Palestinian territories and giving them their own state. This gives the Palestinians some authority to govern their own territory. However, extremists from both sides tried to sabotage the talks. There were protests within Israel which called the Prime Minister a traitor and a Nazi. After signing the second round of the Oslo Accords an extremist Israeli shot the Prime Minister to death. Now extremists from both sides were using violence to derail peace. It was clear that neither was not going to stop until they got the whole territory of former British Palestine.

In late 2000, the Palestinians rose up in another Intifada, which was much more violent than the previous. By the time things calmed down a few years later, a thousand Israelis and 3200 Palestinians had died. This really changed the scene. The Israelis started suppressing the Palestinians. They built walls around their territory and created a suffocating blockade. Unemployment rose to 40%. They are no more trying to solve the situation but simply manage it.

This is the conflict as we know it today. It is unimaginable for Palestinians who just want normal lives. Violence is an everyday phenomenon and seeing an RPG go past your house is not out of the ordinary in Palestine. However, the most inhuman part is that Israeli commoners have become almost apathetic to this situation. The suppression of the Palestinians keeps the conflict limited from their daily lives which therefore becomes irrelevant for them. There is little will in politicians to establish permanent peace. No one knows where the conflict goes from here but the situation there is terrible and it is vital that we come up with a solution.