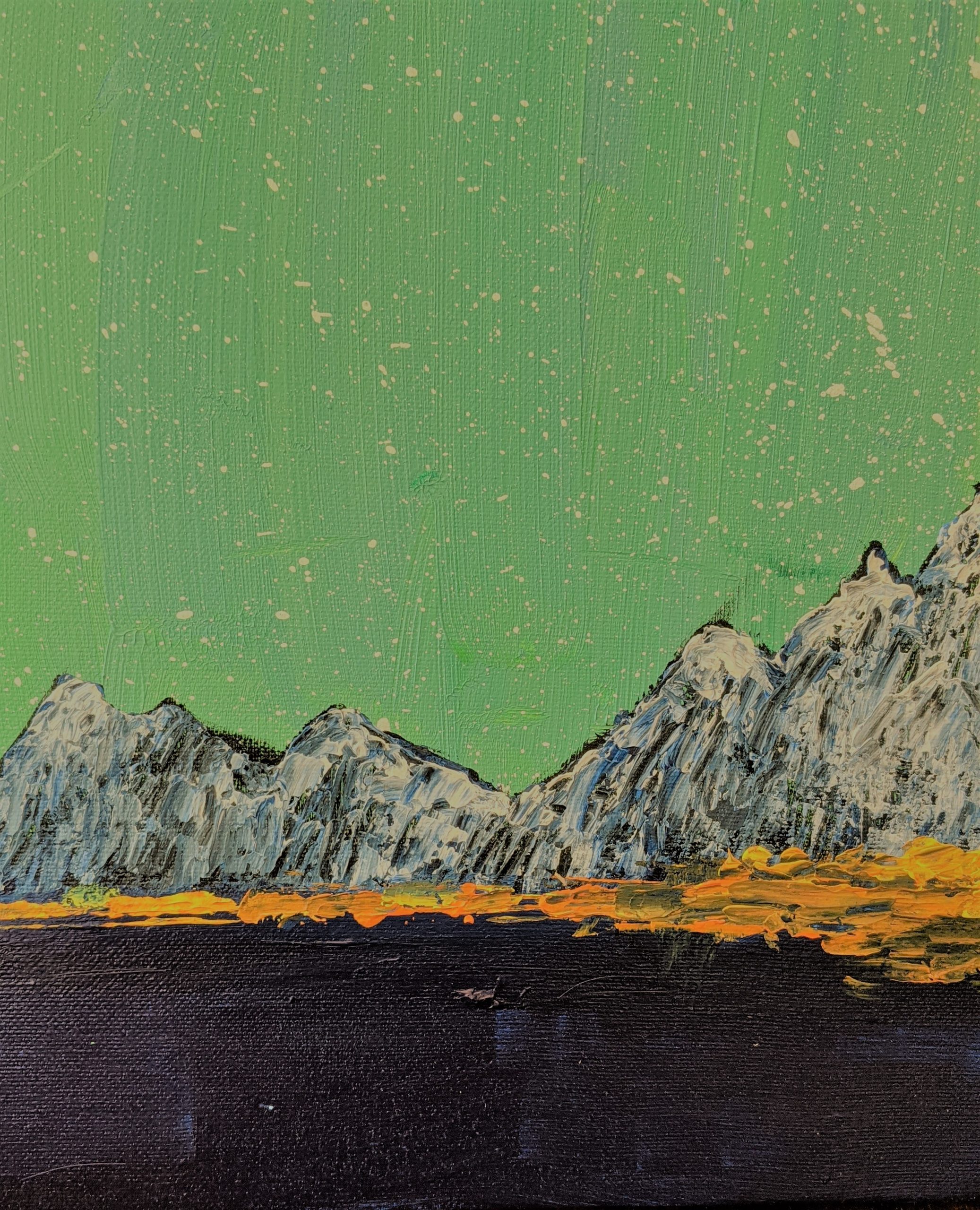 “Aurora had but newly chased the night, And purple o’er the sky with blushing light.”

Mr John Dryden, an English poet living in the 17th century, described the breathtaking Northern Lights in a manner of admiration. For centuries, people were in awe of these resplendent lights dancing in the Poles of the Earth. Speculations on how these mysterious lights came to be range from old Norse legends which say that these lights are reflected off a Valkyrie (fierce woman warriors) to the Vikings believing that these lights were a bridge to Asgard where the gods lived.

It was not till 1896 that we understood how these lights formed. Norwegian scientist Kristian Birkeland was the first to explain how these wonders came to be. Incidentally, the name ‘Aurora Borealis and Aurora Australis’ were coined by a renowned astrologer, (you know him) Galileo Galilei.

The picture above is my mom, my brother, and my attempt at portraying the exquisite northern sky. Our painting skills are not the best, even though we spent half the day making this painting. We made this painting via a YouTube video by an amazing channel called Wow Art. Be sure to check them out and maybe, try some of the paintings by yourself. Anyway, when we were painting the piece, I wondered about the Northern Lights and how exactly came to be. My brother was equally curious and researched the topic before me! So today, I am going to share my research on how northern Lights appear in the sky. I am sure you will be enthralled by the process as much as the lights themselves! Apart from that, I am going to give a host of other trivia such as the best place and time to feast your eyes upon this marvel!

How are these lights formed?

So, let’s answer the big question. How do these lights form? It is not like a boom! Lights all over the place. Though it would have been fun to see a giant explosion, once a year, sadly that is NOT how these lights are formed. So, HOW are they formed? You see, the sun (that bright star in our lives) is so hot and so incredibly dense that it exists in the 4thstate of matter. You already know 3 of them; solid, liquid, and gas. Now, add plasma to the list. Yes, that’s right! Plasma is the 4th state of matter (Now you can impress that strict science teacher). In plasma, positively charged atoms called the ions and sub-atomic particles called electrons float with one another. These particles have such high energy that they manage to escape the Sun’s massive gravitational field and hurtle towards the earth at speeds like a million miles per hour. This phenomenon is called Solar Wind.

But the story is not over yet. No, these particles don’t just hurtle towards Earth and form the Auroras. There is another layer to their journey. A magnetic layer. As we all know, inside Earth’s inner core hot, molten, magnetic metals such as iron and nickel are present. Due to the magnetism of the metals, a sphere is called the magnetosphere. This sphere helps in protecting the bombarding ions and electrons that come from the sun. In fact, most of them bounce of this sphere. Hooray! We’re saved! However, some sneaky intruders sneak into the weakest parts of the sphere, which like any other magnet, are the north and south poles.

Finally, when these particles arrive at the Earth’s atmosphere, they react or meet with the Nitrogen and Oxygen molecules situated in there. These reactions give the oxygen and nitrogen molecules copious amounts of energy which they emit in the form of photons, which are tiny packets of light.

And due to photons, we get amazing light shows across the North and the South poles of our planet. The light emitted depends on the molecule and wherein the atmosphere the reaction occurred. For example, excited oxygen atoms give off green and red colours while excited nitrogen atoms produce blue and deep red hues. Furthermore, oxygen at 150 miles will produce a yellow-green colour while nitrogen at 60 miles in the atmosphere forms my personal favourite, an exhilarating blue. And what’s amazing is that these colours can mix up with each other forming a range of different colours, giving humanity a truly magnificent light show.

I am pretty sure that you have a general idea of how the northern lights are formed. But when’s the best time and place to watch them? Do I have to go to frigid Antarctica where I will freeze to death and be placed in a museum as a memoir? OK, OK even if you freeze in Antarctica, most likely you won’t be in a museum. (Not like you are not beautiful or anything, but which museum is going to collect you from there?) But you don’t have to go to Antarctica or an absurdly cold place. You can go to any of the countries up in the North such as Alaska, Canada, Iceland, Greenland, Norway, Sweden, and Finland. While viewing the northern lights, you can also admire the city and explore it. Boom. A perfect example of killing birds with a stone. And when’s the best time to visit them? Well, it is said that the aurora is the most active in the months’ March and September. Also, you need to make sure that the sky is dark enough for you to check out the lights and that is why going in the winter is recommended. Therefore, going to the locations between late September to late March / early April would be ideal.

Now since that is out of the way, let’s talk about some OMG fact which will shock you to your very last hair (Unless you are bald):

To conclude, northern lights are one of the most pulchritudinous (yep, that’s a word) spectacles that humanity has ever witnessed. These incredible light shows have mystified everyone for centuries but due to science, we were able to finally solve this mystery. Again, Science saves the day! Now that I have researched about the northern lights and know so much about them, here is my way of describing them:

“Twirling in the night sky amongst colors galore, these lights are worth of myth and lore.”