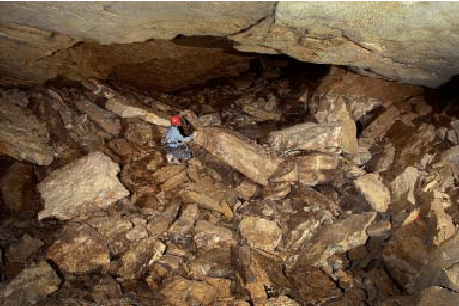 Hello, it is me, Charlie again. A few days ago, something happened to me AND my brother. My brother’s name is Tommy. He is 2 years younger than me. He’s 9 years old. Now we’ll focus on the actual story.

Tommy and I asked our parents if we could go outside.  ‘Sure, but be careful about the mountain on the other side of the forest. There can be rockslides which can trap you in the cave if you go in there.’ Dad warned. ‘OK Dad,’ me and Tommy said.‘ You can go in there, but you have to be extra careful and alert.’ Dad said. ‘ OK Dad,’ we chorused. We said goodbye and we left.

We searched around the mountain and then Tommy suddenly shouted, ‘I found it, I found the cave!’ he yelled. ‘Great,’ I shouted back. ‘Let’s go inside it now.’ He said with excitement. ‘ OK, I am coming to your side now,’ I replied. When we went in there, it was amazing!

We had a dinosaur fossil collection, and the cave was filled with hundreds of fossils. There were small fossils and big fossils. We instantly started digging with our bare hands until Tommy said, ‘ Charlie, my hands are getting sore, I am going outside the cave to collect 2 sticks.’  He said. ‘ OK,’ I replied. So I continued digging. But to my horror, there was a rockslide! Tommy and I started to scream. ‘ Tommy, go fetch help from Mum and Dad!’ I shouted. ‘ OK,’ Tommy replied. I don’t know how, but I could hear Tommy’s footsteps racing off into the distance.

Tommy returned soon with Mum and Dad behind him. ‘Mum, Dad, I have an idea! The three of us will push a rock, and Charlie, you pull the rock.’ Tommy said. So me, Mum and Dad did what we were told. Luckily, I was small enough to crawl my way out.

‘Phew, it was hot in there, thanks for saving me,’ I said. I whispered something in Tommy’s ear. Tommy nodded in agreement. ‘What are you two whispering about?’ Mum. ‘Nothing, we just have a surprise for you, Mum and Dad.’ Tommy told them. So we all chatted on our way home. Somehow, it felt as if the walk home was much quicker.

When we reached home, Mum and Dad didn’t scold us. ‘Mum, Dad, why didn’t you scold us? I asked. ‘ We were more worried about you Charlie and your little brother.’ Mum told us. ‘ It was also an accident.’ Dad chimed in. ‘ Mum, we also have a surprise for you and Dad.’ Tommy said. ‘OK, but first you need to have a shower and dinner and then you can show us your surprise.’ Dad said. ‘ OK,’ Tommy and me said.

After we had a shower, we all had dinner. It was 7 pm and our bedtime is at 8 pm, so we still had about 1 hour left. ‘ OK, you can both show your surprise.’ Dad said. So Tommy and I showed Mum and Dad the dinosaur fossils. We could tell they were impressed because of the looks on their faces.  ‘Wow,’ they both said. After organizing the fossils, we all brushed our teeth, said goodnight and went to bed. We still had 5 minutes left, so Mum said we can read a book, but we were so exhausted that we went to bed early. The End.