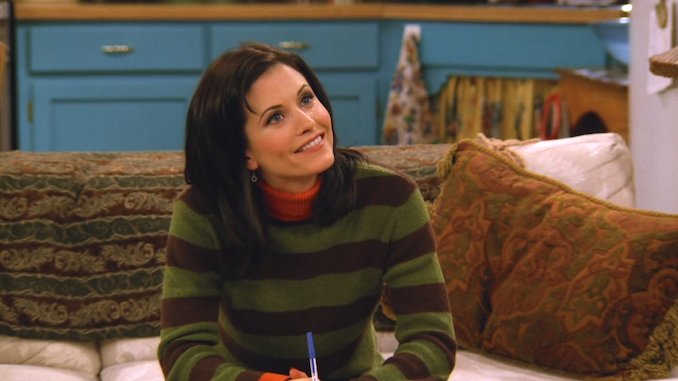 1) Her competitiveness is intense and hilarious!

Many people find Monica’s competitiveness annoying at times, but I genuinely feel that it is one quality of hers that makes the show super funny! Think about it- it was hilarious when Monica and Mike were playing table tennis in season 9 episode 24, WHY? Because Monica’s urge to win made it funny! In the apartment switch quiz, on episode 12 of the 4th season, if it wasn’t for Monica’s lines, Chandler’s sarcasm would not have come in! Another reason I absolutely adore her for being competitive is that it impresses upon us that she is a very dedicated person!

2) She is super organized and clean!

Monica Geller is the most organized and clean person on the show, a quality that not only is extremely important for human health and hygiene but has also helped create hilarious lines and comments on the show.

Despite her bossy nature, she is the most caring person on the show. She is a very very talented cook and always makes delicious dishes for everyone to relish. In all Thanksgiving episodes, Monica always cooks dinner and puts in all her effort and energy so everyone has a great time! In season 8 episode 9, Monica makes a gigantic turkey on Thanksgiving, only for Joey! I think that was a very sweet gesture.

After Rachel runs out on her wedding and comes to Monica for help, she agrees to help her out even though Rachel did not invite her to the wedding. She even lets Rachel move in with her and introduces her to all her friends. Nothing stops Monica from supporting a friend in need. When Rachel sprains her ankle, Monica hesitantly allows her to exchange their names, just so the latter would be able to use the former’s medical insurance. She says yes in the first place because Rachel tells her that she’s her emergency contact! Also, when naming Rachel’s daughter, Monica magnanimously gives her permission to take the name ‘Emma’, which she had been planning to name her daughter since she was 14! She says that she loves Rachel more. How incredibly sweet!

5) She is an extremely loving wife!

When Chandler’s surprise proposal gets ruined, Joey convinces him that all he needs to do is take a couple of days making Monica believe that he’s nowhere near ready to get married, to add the element of surprise when he actually proposes. Later, Chandler gets worried that he might have gone too far in acting that he does not want to marry Monica. In the face of this, Monica gets to know everything from Joey and surprises Chandler with a room decorated full of candles, and she gets down on one knee and tries to propose, but she starts crying so much she can’t finish it and then Chandler finishes it, but it’s the thought that counts! This gesture was so loving, romantic, and sweet, especially after listening to Chandler not wanting marriage all day! I simply love the way she loves him! Monica also supports Chandler through everything during their relationship and is a great friend, girlfriend and wife to him throughout the series.

I truly love Monica’s character on the show, and if YOU do too, then comment and tell me what you like most about her!