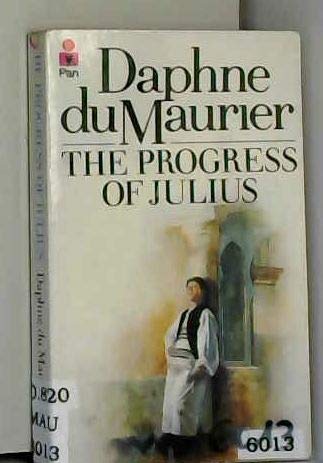 ‘The Progress of Julius’, while not one of Daphne du Maurier’s widely known novels, is a timeless classic which has been sorely overlooked by those who enjoy classics. While not everyone’s cup of tea, du Maurier handles every aspect of this book in a meticulous and careful way, coaxing the reader into not feeling overwhelmingly repulsed by the twisted main character, whose moral principles and decisions are beyond questionable. On the contrary, the writing style is such that the reader is eager to immerse himself more into his story and discover new parts of his captivating personality.

The book showcases the growth of Julius Lévy, starting from a little boy living in a humble village near the city of Paris in France to becoming a formidable millionaire dominating England’s business sector. A force to be reckoned with. But don’t let this delude you into thinking that Julius’ story makes for yet another “inspiring” tale of a character who fought against the odds to rise up to power. His story is not what it seems.

While he did struggle, Julius is a cunning and clever individual whose success was always at the expense of others. He thrives on the envy of the public towards his riches, which propels him to do more and be more. Julius lives and feeds on avarice. In his mind, he must be worshipped by others and has a god complex. He never understood the weakness in people’s hearts since youth, and his harsh opinions and decision-making at such young age leave the reader stunned. Julius is a man who uses people as leverage to achieve his means, but once their use is over, he merely discards them like a rag on the streets. This behaviour was not only limited to his work but remains prevalent in his personal life, portrayed when he mistreats his admirers for the thrill of abusing his power. Julius is a very possessive character who has a mania for control. If he can’t have something, then nobody else must have it. And he will go to any means, I mean any, to ensure this. It leads to horrifying and chilling moments in places that will follow you around for a long time.

The book offers a unique perspective that is rare to find in any book these days, as the reader is given the golden ticket to a deep understanding of Julius Lévy’s thought process and the manner in which his brain functions. Mostly, books are narrated from the perspective of a protagonist whose motivations lie on or near the side of good. This perspective is so prevalent nowadays that everyone effortlessly connects with the struggles and emotions of such inherently good characters.

While we all see unapologetically cruel characters in books as well, they are usually antagonistic by virtue and serve as a foil for good. While Julius is by no means someone who must be appreciated and looked up to, nor is he a man who adopted his unforgiving means by tragedy, he falls under a totally different yet uncommon category of personalities. He almost makes the idea of a person having one moral code that is the basis of they’re personality, being either good or bad or even morally grey, as a totally outdated and invalid sentiment.

He doesn’t have a strong character arc or a sudden epiphany of his wrong ways. And that is quite simply because he was born that way, and his way of thinking is wired that way. He even begins to grow on you. If we put aside his total lack of care for people in his life, his drive and vision are admirable, to say the least. The way in which he never ceases to improve already efficient systems in his work and is always thinking critically. He is ten steps ahead of his opponent, and even when he is on top of the rest, he never stops working and expanding. He lives boldly and vivaciously, never striking to maim but to kill. Julius is a man who wants to hold the world in an iron fist and will stop at nothing to achieve it.

Thought-provoking, chilling, and extremely haunting if you are interested in dark twisted characters who bend, and when provoked, break morals with no trace of hesitation or remorse; this book is just for you.