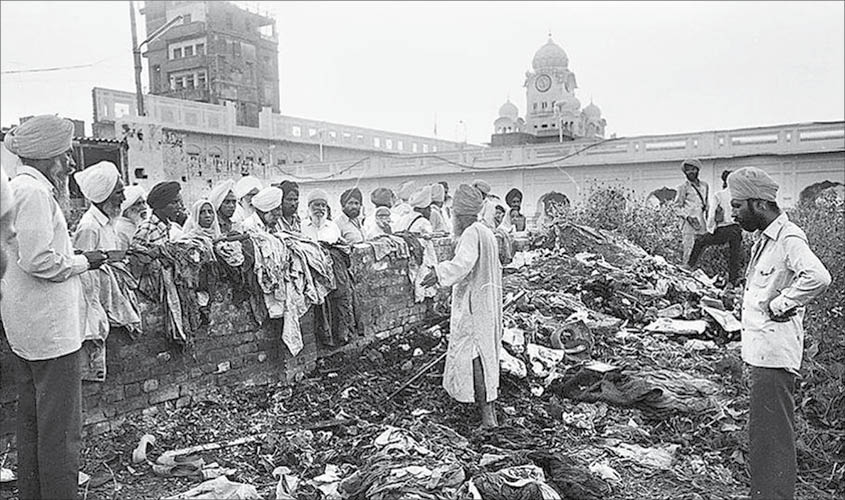 ‘One of the largest military operations carried out by Indian security forces’ and the ‘Golden Temple’ seem like two distant topics. But sadly, they aren’t.

It has been 37 years since Operation Blue Star was carried out, but the scars still remain in the hearts and souls of the people who live to tell the tale. Operation Blue Star was the then Prime Minister, Indira Gandhi’s solution to loss of governmental control on Punjab. To understand more about this, we must travel back to the 1940s.

The Khalistan movement was a Sikh separatist movement seeking to create a homeland for Sikhs called ‘Khalistan’. Although the movement started in 1940, it gained popularity in the 1970s and reached its peak in the 1980s. Jarnail Singh Bhindranwale, the leader of Damdami Taksal, was also a supporter of this movement. Bhindranwale had a lot of influence over people, especially the youth. He convinced many to follow Sikh rules and tenets.

Bhindranwale’s followers committed widespread murders in the 1980s. In the period between 4 August 1982 and 3 June 1984, more than 1200 violent incidents took place, resulting in the death of 410 people and the injury of 1180.  The year 1984 (from 1 January to 3 June) saw 775 violent incidents, resulting in 298 people killed and 525 injured! They wreaked havoc around the country and left an indelible scar in many Indian’s hearts. So, Harchand Singh Longowal, the president of the Sikh political party Shiromani Akali Dal, had invited Bhindranwale and his followers to take up residence in the Golden Temple to evade arrest by government authorities.

Thus, the Prime Minister at the time, Indira Gandhi, seemed to have no choice but to launch a military operation to capture Bhindranwale and his followers and gain back control of the Golden Temple from them.

Operation Blue Star was divided into two parts – Operation Metal, which focused on the Golden Temple and on removing militants and Jarnail Singh Bhindranwale from there; and Operation Woodrose, which was a ‘clean up’ mission that was launched throughout Punjab so as to wipe out the rest of the militants who were in different places.

The government claimed that the operation was carried out by taking utmost care not to harm any civilians, but the day chosen was the martyrdom day of Guru Arjan Dev, which led to many innocent people being trapped inside the temple complex when the army opened fire. The total casualties were said to be 5000-7000, which is a LOT more than what the government put out. Also, newspapers and any other form of mass communication regarding this event was censored. The government proceeded to rub salt into the wound by barring all media from entering Punjab, and the army made it worse by torturing many Sikhs. This outraged not only Sikhs but also Punjabi Indians.

The bloody aftermath of this horrible miscalculation was the assassination of Indira Gandhi by her own Sikh bodyguards, and anti-Sikh riots breaking out all over India. To add fuel to the fire, the police seemed to be helping the rioters harm the Sikhs. 8000 to 17000 Sikhs were estimated to have been killed. Amidst the darkness, kind gems shone the brightest and offered shelter to the Sikhs.

Out of all the disastrous things that have happened in India, I am sure you will agree that Operation Blue Star was one of the worst.