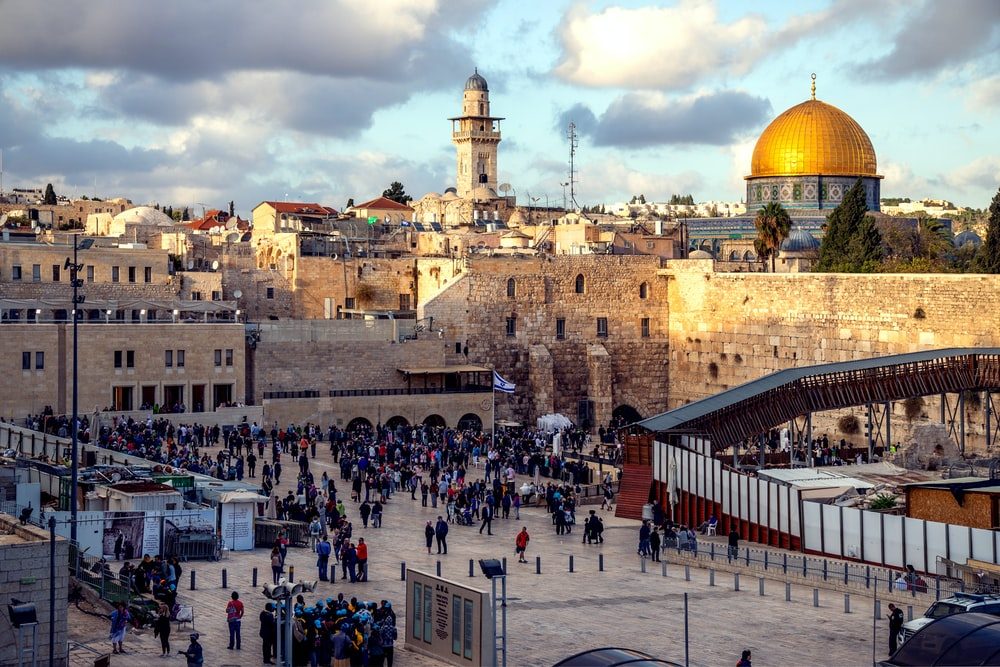 Jerusalem is a city located in Israel bordering Eastern Palestine. The city borders three ravines on the South, East and West. The south extends till the Judean desert while in the north and west lie the Jazreel Valley and the hills of Galilee. The city is visited by millions of tourists around the year and is a mix of many cultures and religions.

Even though the city has a rapidly changing population, it has always remained diverse and cosmopolitan. Arabs wear their traditional and modern clothes while Jews wear casual or orthodox dresses. There are many tourists and all of them visit the plethora of synagogues, churches and mosques. The white and pink stone makes the city unique from others. The local bazaars and markets have a distinct smell of spices and cooking. The ringing of the church bells and the chanting of prayers at the Wailing Wall add flavour to the city.

The Old City with its narrow, cobbled roads has almost no sign of cars. Due to its historical significance and histories of numerous cultures and religious groups it was declared by UNESCO as a World Heritage Site. However, outside the old city Jerusalem is a very modern city with a great network of streets and transportation, skyscrapers, businesses, schools and restaurants. The mingling of the diverse languages of Hebrew, Arabic and English among others keep alive the multicultural complexities of life in the city.

The world’s three most prominent monotheistic religions, Islam, Christianity and Judaism, all have their roots in Jerusalem. All three religions come from Abraham who is believed to be a friend and messenger of God.

For the Jews, Jerusalem is the holiest city and is considered the ancestral home of its people. According to them God resided in this holy place. It is even given special status in Jewish law. Moses, the Jewish prophet, had spoken of the promised land. This promised land, later known as Zion, the land of Jews, is believed to be in and around Jerusalem. The First Temple, now known as Temple Mount (a famous tourist spot) is where Abraham in prehistoric times, almost sacrificed his son on God’s command.

Christians believe that Jerusalem is the place where Jesus was brought as a child. Its reference in the Old Testament of the Bible talks about how Jesus preached and healed in Jerusalem. Jesus’ last supper was also in Jerusalem and it was here that he was arrested and later crucified.

Jerusalem is the third-most sacred site for Muslims after Mecca and Medina. Islamic tradition dictates that many prophets were associated with this city. In fact, Prophet Muhammad is said to have come to Jerusalem on a winged animal called Buraq. Prophet Muhammad announced that all Muslims would pray while facing Jerusalem. However later on in 624 CE he changed this to the Kabba in Mecca. The Dome of Rock which is built on Temple Mount is from where Prophet Muhammed is said to have ascended to heaven to talk to God. After Prophet Muhammed many of his companions lived in Jerusalem and were later buried there.

These three religions all have connections with this holy city and naturally there were enough and many Islamic and Christian kings who wanted control. The earliest traces of humans in this area were found on a hill and are from the waning Copper Age around 3,500 BCE. In 1,000 BCE King David invaded Jerusalem and made it the capital of his Jewish kingdom. His son, Solomon went on to build the First Temple 40 years later. The Babylonians conquered Jerusalem around 400 years later in 568 BCE. They destroyed Solomon’s temple and expelled all the Jews in their kingdom. 50 years later the temple was rebuilt as the Second Temple.

Alexander the Great came in 332 BCE and consolidated Jerusalem as part of his massive empire. In the coming centuries the city was captured and ruled by several others including the Romans, Arabs, Persians, Fatimids, Turks, Crusaders, Egyptians, Mamelukes and other Islamists. During this period both Jesus and Prophet Muhammed visited the city.

Finally, in 1517 AD the Ottoman Empire conquered Jerusalem. They ruled the city for close to four hundred years until World War I. In 1918, post the war, Great Britain took control of Jerusalem as part of British Palestine. They controlled the city and the surrounding region. In 1948, Israel was born and Jerusalem was made a holy international zone. However by the very next year the first Arab-Israeli war Israel took place and Jerusalem was divided among Israel and the Jordan-controlled West Bank, part of Arabic Palestine. 20 years later, the Six-day War took place and Israel seized all of Jerusalem.

Jerusalem with its varied culture and religions has always been a point of dispute. Both Israel and Palestine are fighting over the place and want to make it their capital. However, it is difficult to secure a plan which everyone can agree on. While the city’s future remains uncertain, it is clear that Jerusalem has a great emotional connect with a large part of the world’s population.