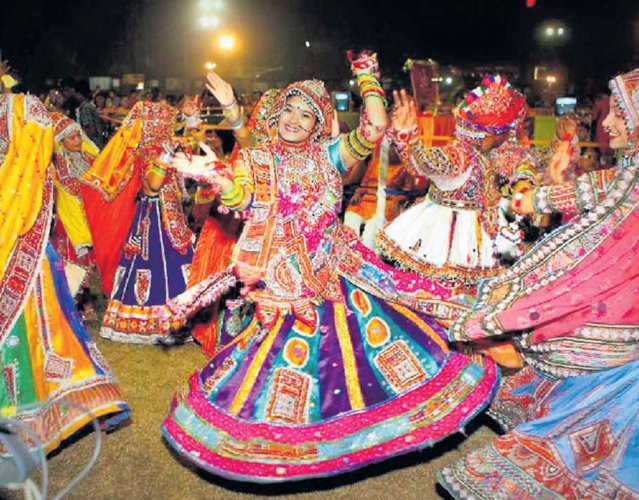 Garba is a conversation between one’s body and soul. The twirls, the sound of enthusiastic music and the energy of devotees of Maa Amba make an outstanding scene to watch. This is performed to celebrate the fertility of women hood and respect goddesses.

It is a religious event that originates from a state of India called Gujarat. It is mainly played during Navratri. Navratri is a Hindu festival observed in honour of the goddesses Durga or Amba. It spans over 9 nights and is celebrated differently in various parts of Hindu culture.

It was initially performed in Gujarat but due to constant migration throughout the nation, exchange of traditions and culture took place and today many people all around are excellent Garba dancers. There are many places where such events are organised and encouraged and now it’s not just Gujarati people of various castes and religions that do Garba. Along with Garba, Dandiya is also performed. Basically Dandiya is played with colourful bamboo or wooden sticks.

Even today’s generation is eager to learn Garba. Especially Gujaratis wait for these 9 nights throughout the year. Dressing up and going to Garba nights is a different type of fun that no one would ever want to miss. People win prizes for their dressing and dancing skills.

A lamp or diya or an image of goddess Amba is placed in the middle of circles or rings. It is performed in circles as a symbol of the Hindu view of time. The circles resemble the life cycle from rebirth to death and again to rebirth. The only thing that will remain constant is Maa Amba. The dance represents the feminine forms of the goddess. Hence it is the only thing that remains unchanging in a universe that keeps changing.

These kinds of festivals and dance forms help us understand our history and culture.