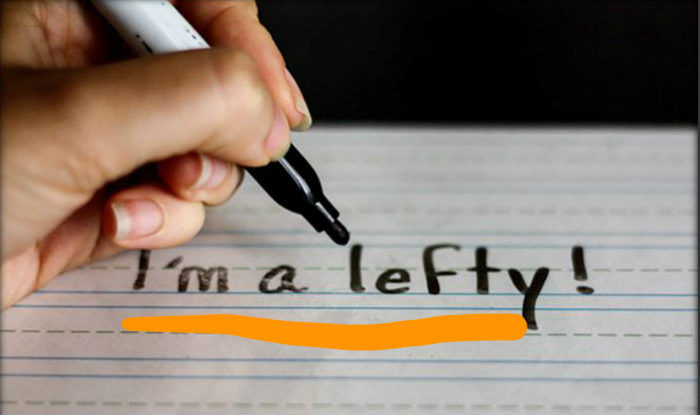 There are various myths, theories, and facts about people with their dominant hand being the left one. We might know some people who are lefties or ourselves might be one. Historically lefties were treated as outcasts and sometimes accused of witchcraft. Earlier scientists even thought that left-handedness was associated with minor brain damage. Some think lefties are smarter and more creative while some think they relate to various health problems. But most of these myths have been debunked over the years with medical literature leading to inconclusive results.

So how is one right handed or left handed?

Again with various theories in place, the determination of this complex trait of handedness is influenced by multiple factors like environment, genetics, and chance. Genes are only responsible for 25% of the time as in fact identical twins with the same genes can have different dominant hands. Hand preference develops before birth and becomes increasingly noticeable during a child’s early years. Cultural influences, environment, and prenatal exposures may also play a role in determining handedness. Some also say that this may be linked to stress during pregnancy which is backed up by evidence from a 2008 Swedish study. This study analyzed moms and their 5-year-old children and women who were depressed or stressed during their pregnancies were more likely to have mixed- or left-handed kids.

Connection between your brain and handedness?

One common handedness theory is the brain’s division of labor among the two hemispheres. The left side of the brain often controls your logic, analytical and rational thought, verbal processing, planning, detail-oriented perception as well as the right side motor skills (using your right hand for example). It is said that those who are right-handed, have their left side of the brain which is more dominant. So this theory also states that the right side of your brain which is responsible for intuitive thought, holistic perception, creativity, imagination, emotional thought, and left motor skills corresponds to being left-handed or that lefties have a reversed origin. While this theory may be true for some rare cases, it doesn’t explain why the majority of left-handers have left-hemisphere language dominance – just like right-handers. Therefore this theory is not foolproof and many psychologists around the world think that this is just a “common myth”. About 98% of right-handers are left-brained, but so are about 70% of left-handers. Only about 30% are right-brained or bilateral-brained (in which both halves are equally capable). Lefties or a southpaw’s brain structure might differ slightly from righties but they certainly do not have reversed brains as the former theory suggests.

Studies in the UK, US, and Australia have revealed that lefties differ from right-handed people by only one IQ point, which is negligible. Another study in 2007 found that out of 150 subjects, left-

handed participants were significantly more likely to perform better and faster on an intelligence test than right-handed people. Diving deeper, this study revealed that there are genetic differences between left-handers and right-handers since lefties had better connected and more coordinated right and left hemispheres which potentially lead to having superior verbal skills. However, other studies show that left-handed children below the age of 11 often perform worse than right-handed students in a variety of topics but they catch up with the rest of their classmates as they get older. All in all, different studies indicate different results, and it’s important to note that these differences between lefties and righties based on intelligence are often not noteworthy and therefore left-handed people are not smarter or more verbally efficient than righties.

What about other qualities like creativity, music and art?

It doesn’t make you a better musician

It’s an old wives’ tale that southpaws are superior musicians but this myth doesn’t quite stand up to scientific scrutiny. Some studies may suggest otherwise like when Diana Deutsch found that left-handers, particularly those with mixed hand preference, performed significantly better than right-handers in musical memory tasks. Whereas other studies indicate that handedness doesn’t play such a big role while playing music.

It doesn’t make you more creative

Left-handed people are often credited with being more creative than righties, but that’s a hard thing to measure. That rumour may come from a 1995 study which found that left-handed men thought “out of the box” or engage in more divergent thinking” than right-handed men. Ronald Yeo, Ph.D., professor of psychology at the University of Texas-Austin says that “There’s a grain of truth to the creativity idea, but when you look at actual creative achievements in one’s lifetime, the evidence is not strong for association with left-handedness.”

Lefties are known for being reclusive and artistic which is an intriguing contrast from a few decades ago, when people thought left-handers were intellectually or ethically inferior. However, the stereotype does not accurately reflect reality since studies have discovered no difference between left- and right-handed people on such artistic traits.

Do they face any potential health issues?

Despite the myths related to specific qualities of left-handed people, it is indeed a fact that lefties are at a slightly higher risk of various different health problems and psychotic disorders. Dyslexia, schizophrenia, ADHD, depression, anxiety disorders are some mental illnesses that are comparatively higher in lefties than right-handed people. 40% of those with schizophrenia wrote with their left hand which is considerably higher than the 10% of lefties found in the general population. Left-handed people are also more likely to have physical disorders such as low birth weight, heart disease, bone fractures, and nervous system complications.

The “upper hand” in sports

Lefties certainly have an advantage when it comes to one on one sports like tennis, boxing, fencing, and pitching a baseball. Usually, athletes train against right-handed opponents, but while facing a southpaw, the leftie can easily adjust but the righties are at a major disadvantage being forced to engage in an asymmetrical and poorly prepared battle. Lefties also make better fighters since they have a physical advantage over righties. They make up about 27% of violent societies which are more likely to go to war and only 3% of peaceful, primitive societies. Same way even sports like table tennis, badminton and cricket have an overrepresentation of southpaws to gain the edge.

To actually think of it, handedness really doesn’t matter. There are a variety of facts and myths about lefties and righties, out of which the majority are not 100% accurate. Most importantly, one shouldn’t assume a person’s personality traits or qualities just based on the hand they write with. The differences discovered in various studies over time indicate subtle variance between the two groups. Take a look at some of the world-famous southpaws like Bill Gates, Ruth Bader Ginsburg, Steve Jobs, Oprah Winfrey, and Barack Obama. They certainly didn’t stick to the left-handed stereotype!