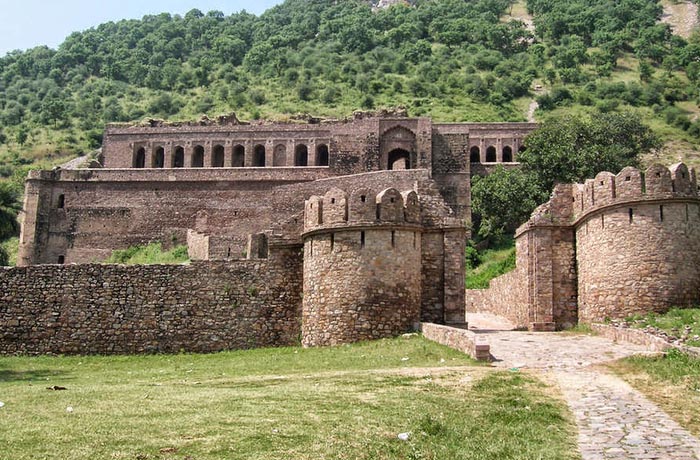 Bandhavgarh National Park is many things. It is a great holiday destination for people wanting a break. It is an amazing place for wildlife enthusiasts and photographers. And it is home to 64 tigers. However, what most people do not know about, is the amazing fort situated on a plateau in the middle of the jungle. Bandhavgarh Fort was a great tourist destination till 2012 when the Madhya Pradesh government banned tourists from visiting it. It is now private property of the former Maharaja of Rewa, Martand Singh.

We do not know much about the fort. There are references to Bandhavgarh Fort in very old Hindu scriptures like the Narad-Panch Ratra and Shiva Purana which date back to the 10thCentury, but no one really knows when the fort was built. The mythological story dates to the Ramayana, which is 3000 years old. It is believed that the plateau on which the fort stands was originally a mountain. When Lord Ram stepped on the mountain he made its peak flat. He then built a fort on the 560-acre plateau and gave it to his brother Lakshman. This is where the name “Bandhavgarh” comes from. Bandhav means brother and garh means fort meaning Brother’s Fort.

The other and more plausible story dates to the 14th and 15th century in the Gond Empire. The Gond emperors have built multiple temples across India and most of the fort’s architecture is quite like these temples. Since it was situated in the midst of a dry forest the kings needed water for which they built 12 ponds surrounding the fort. Most of them have dried up and only a few of them remain today.

The fort is especially important for multiple reasons. There are many Hindu religious sculptures and statues inside and around the fort. The most famous one is called Shesh Shaiya, which is at the bottom of the fort and can be visited during a jungle safari in the park. It is a statue of Lord Vishnu lying on his snake, Shesha-naga, with a stream of water flowing from his legs. This stream of water runs all the way outside the massive park and is aptly named Charanganga (Freshwater river running from the feet). Along with this there are beautifully carved religious scriptures on the fort’s walls.

The fort was also a center for trade and business. For approximately 15 years (from 1245 to 1260) Bandhavgarh Fort was the capital of the southern province of the Gahora kingdom, attracting many foreign merchants. It was also one of the only forts in central India and was an important halting point for kings and merchants travelling across the country.

We do not know who built the fort but there are written records of emperors who have ruled the fort. In the 3rd Century BCE, Chandragupta and Bindusara of the Mauryan Empire ruled from here. 600 years later the Vakataka rulers came to the fort. A few more kingdoms followed until 1617, when Maharaja Vikramaditya Singh of the Mewar kingdom shifted his capital to Rewa. Since then, it has been deserted.

From jungle safari’s in Bandhavgarh National Park, we can spot the peak of a white temple inside the fort. This is a temple of Lakshman giving some reason to the Ramayana origin story. It is only open to the public 3 times a year, when a religious fair is held and people can trek up the plateau to the temple.

Bandhavgarh Fort is an important part of India’s history and culture. We need to be able to showcase this amazing feat of architecture to the world.