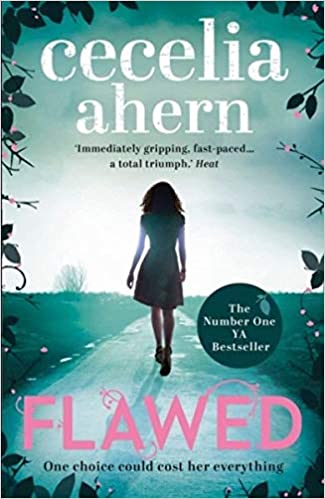 Flawed is a book that follows the life of a young Celestine North and her story in a town where perfection is required from all citizens. Their perfection allows this community to sustain itself and prosper. Cecelia Ahern’s Flawed shows how a logical person like Celestine might find holes in her society.

In this society, anyone who is found guilty of being “flawed” gets a branded F seared on five parts of their body depending on their flaw; their temple for bad decision making, their tongues for lying, their right palm for stealing from society, their chest for disloyalty to the Guild (the judges that give out the punishments), and the sole of their right foot for stepping out of line in society. These “Flawed” individuals live in society but they have separate rules and are restricted from many normal daily activities. Celestine was able to live in this society without any doubt until someone she knew was branded flawed and when she was found flawed. The book is a great way to show how our society even in real life looks towards perfection.

We strive to see a person who is perfect in all ways. In their society, a bad judgement call to protect someone is also considered a flaw. This may be done for the benefit of someone or to protect someone but that is not given any importance. Even helping a flawed is considered a flaw, this is what Celestine is found guilty of. On a bus, she stood up for an old flawed man who was coughing. Celestine helped the old man even though she subconsciously knew that this would not go her way. Against her better judgement her human compassion took over and she helped that old man to a seat. The Guild came for her and she was going to be put on trial.

One of my favourite parts of the book that showed me the true character of Celestine North was when she was asked to lie. The head judge of the Guild was someone Celestine knew very well and he asked her to twist the story so that it looked like it was the old man’s fault when it wasn’t. She could have easily put this on the old man and not have been branded flawed. However, the way Celestine handles this situation and its consequences show her true spirit and the spirit that we should inherit as well. Real justice was shown as she fights through what she believes and what her family expects of her.