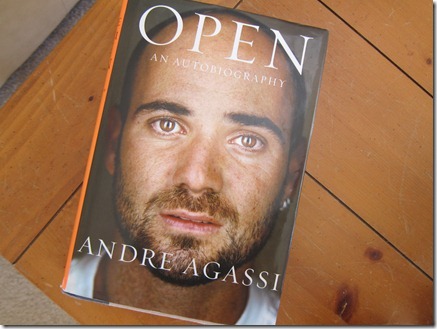 Open is Andre Agassi’s fantastic autobiography which describes his journey starting with escaping the mouth of the Dragon to giving so many people joy in watching tennis. I myself, do not know much about tennis. After reading Open, I have got an amazing insight into the lives of a tennis sportsperson and the game of tennis.

Agassi started playing tennis at a young age when his father forced to play on a makeshift court against a ball machine called the Dragon. He has hated tennis from the moment his journey started. He dropped out in eight-grade and his father enrolled him a tennis academy. It was more like prison than anything else and it was probably the worst time in his life. In the academy he rebelled. he started dressing up like a punk rockstar, pierced his ears and dyes his hair. Soon he turns pro at the age of 16.

Being amazingly skilled, he wins smaller tournaments like Key Biscayne and the Indian Wells. However, each loss is very painful. He builds his team to support him who eventually go on to become his best friends. Soon enough, he has won 3 slams and the only one left is the French Open. Becoming no. 1 in the world surprisingly doesn’t mean much to him and he only wants the French open to his name.

The books give a very good insight in Agassi’s rivalries against Pete Sampras, Jimmy Connors and Roger Federer, to name a few tennis greats. He goes through many high’s and low’s and multiple injuries. However, after a fabulous reset, he wins the 1999 French Open and from here begins his journey to the oldest no. 1 tennis player.

I personally really enjoyed this book because it showed Agassi’s struggles and his tough journey to join the list of players in the Tennis Hall of Fame. Open is certainly one of the best books I have read this year.