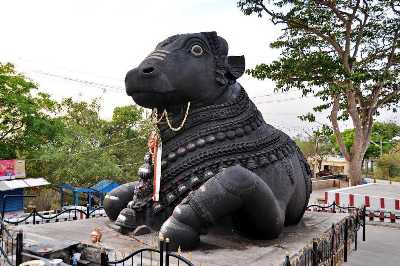 “It’s not safe for us to go there, at least during these times, let’s hope we’re able to go there next year, we aren’t going this time. Okay?”, my mom said, as I was trying to pester her to go to ‘The Kadalekai Parishe of the year 2021.’ I headed back to my room, my mind still hung up in the fair, cherishing the memories we created a few years back.

The citizens believe that there was a huge groundnut field where the temple is presently situated. The farmers were troubled by a wild bull that destroyed the crops, and all the farmers who resided in the area resolved to fight against the bull. In the fight that ensued, one of the farmers happened to hit the bull on its head with a stick and the bull instantly turned into a statue which kept growing with each passing day. The farmers were frightened by the circumstance and approached Lord Shiva, whose vahana or the vehicle is the bull. It is said that Lord Shiva answered their prayers and it is believed that the statue was stopped from growing by placing a metal plate on its head.

However, according to the history, during the Vijayanagara empire in 1537, the temple was built by Kempe Gowda in the Vijayanagara architectural style. The small temple consists of only the shrine of the Bull, fronted by a porch in the Vijayanagara style. The large granite Nandi/Bull monolith is placed on a plinth in the temple shrine or the garbhagriha, after which the temple is named The Big Bull Temple. The statue of the Bull is placed besides a Shiva Lingam. The temple also has idols of Surya deva (Son God) and Chandra deva (Moon God). The tower is decorated with Saivite figures placed over the shrine, which was constructed in the early 20th century. The temple is said to house one of the largest Nandi murthis or figures in the world. The huge sculpture is approximately a height of 15ft and about 20 ft long.

Over a period of time, the statue of Nandi at the temple has turned black from its original colour of grey due to the regular application of coconut milk and butter that the devotees offer. An inscription found inside temple suggests that the Vrishabhavati River flowing to the western Bangalore has its main source located in a spring beneath the statue.

Kadalekai Parishe or the groundnut fair takes place once every year on the last Monday and Tuesday of the Kartika month of the Hindu calendar. A wide range of groundnuts are salted, spiced, boiled, fried, honey-roasted and even sugar-coated. People come in large numbers to buy the groundnuts, along with numerous stalls selling toys, street food, ornaments, handmade idols, and a lot more. This is the best and the most crowded time of the year to enjoy the carnival vibes. The Groundnuts are sold on the day remembering the reason for the formation of the temple- the farmer hitting the wild bull.

Situated inside the lush greenery of the Bugle Rock Park, The Dodda Basavanagudi Temple remains one of the must-visit temples in India. The temple is busy all around the year, but busiest during the Groundnut Fair and the Ugadi festival (New Year according to the Hindu calendar).

The whole area of Basavanagudi is one of the Bangaloreans’ perfect places for a one day outing-enjoying the greenery of the Bugle Rock Park, visiting the Dodda Ganesha and Basavanagudi temples, getting into the Gandhi Bazaar to go on a shopping haul and finally end the day with Masale Dose and by 2 Filter Coffee in the very famous Vidyarthi Bhavan. Basavanagudi, indeed has created a lot of memories for me. Even though I couldn’t go there the last time, cherishing those memories revives the carnival-like vibes of the Kadalekai Parishe!