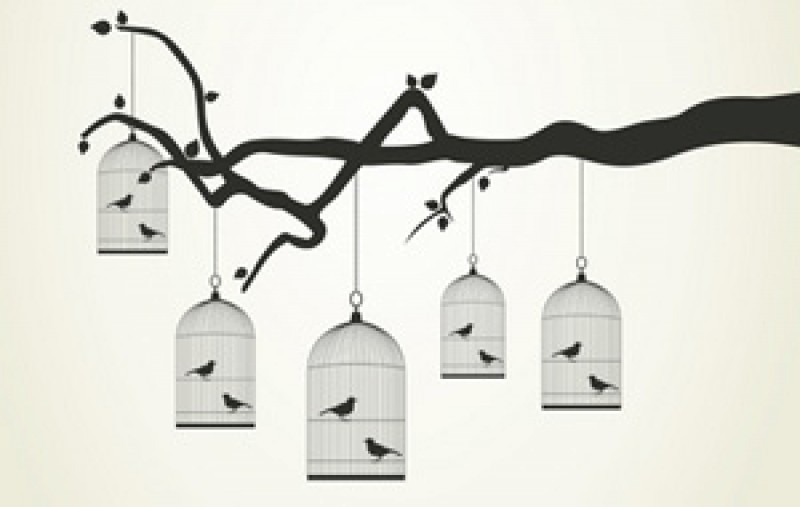 A free bird leaps
on the back of the wind
and floats downstream
till the current ends
and dips his wing
in the orange sun rays
and dares to claim the sky.

But a bird that stalks
down his narrow cage
can seldom see through
his bars of rage
his wings are clipped and
his feet are tied
so he opens his throat to sing.

The caged bird sings
with a fearful trill
of things unknown
but longed for still
and his tune is heard
on the distant hill
for the caged bird
sings of freedom.

But a caged bird stands on the grave of dreams
his shadow shouts on a nightmare scream
his wings are clipped and his feet are tied
so he opens his throat to sing.

The caged bird sings
with a fearful trill
of things unknown
but longed for still
and his tune is heard
on the distant hill
for the caged bird
sings of freedom.

In the poem “Caged Bird,” Angelou uses clear imagery and unique diction to approach the idea of freedom.

Angelou creates a distinct contrast between the imagery that she uses for the caged bird and the free one. For the free bird, she uses images of how he “dips his wing in the orange sun rays and dares to claim the sky” and “leaps on the back of the wind and floats downstream till the current ends”. However, for the caged bird she says, “(he) stalks down his narrow cage, ” “his wings are clipped and his feet are tied,” “sings with a fearful trill of things unknown but longed for still.” The image that comes to mind when she talks about “downstream” and “till the current ends” is that of a river. The bird leaping on the back of the rushing wind and being near this river showcases the incredible strength and beauty of the free bird and its environment. “Dipping his wings in orange sun rays” implies that the free bird is successful enough to fly that high near where the orange sun rays come from. It shows how the freedom it has in its environment has allowed it to succeed and “dares to claim the sky” connotes the concept of how the freedom to fly wherever he wants gives him the confidence to call the sky his own. The imagery of the caged bird is very different from this. He (the caged bird) is not only imprisoned in his cage but has his “wings clipped” and “feet tied” which are very man-made images, that intensify the image of the bird’s incarceration. When Angelou says “the caged bird sings with a fearful trill” she is openly asserting that the caged bird is scared, obviously because it is imprisoned and probably cannot understand why. This shows readers how captivity inspires fear and sadness. The caged bird is tied, has clipped wings so he can’t move and is imprisoned in a cage; however, he is singing. His voice is still free to be heard outside of the cage. This shows that along with the sadness and fear that captivity brings, it also brings the inspiration of hope to escape that bondage. Unlike how the free bird flies near rivers and up in the sky, the caged bird “stalks down his narrow cage” showing how small his domain is compared to the endless sky that the free bird claims to be his own. This shows how imprisonment brings a sense of confinement to a certain space and often intensifies the sorrow of failure to escape that. Angelou uses this distinct contrast to signify the unhappiness and loss that incarceration brings and the joy, satisfaction and confidence to take ownership of one’s surroundings that freedom brings.

Furthermore, to further imply how bondage brings unhappiness, Angelou uses a disparity between the unique diction that she uses to describe the caged bird and the free bird. On one hand, while describing the free bird, she uses verbs like “leaps,” “thinks of another breeze,” and “dares.” On the other hand, while describing the caged bird she uses verbs like “stalks,” and “shouts,” and uses phrases like “can seldom see through his bars of rage.” The verbs that Angelou uses when talking about the free bird highlight the enjoyment of freedom. Verbs like “leaps” are often associated with joy (leaping with joy). The use of “dares” here further shows how the free bird has a feeling of self-possession or ownership over his surroundings and how he has the self-confidence and self-esteem to do so. Freedom brings him the self-esteem to take ownership of his domain and be happy about it. When Angelou says “thinks of another breeze,” she is referring to how the free bird is always thinking of moving forward and acquiring more for himself in the future. She is implying that the self-confidence that freedom gives to the bird allows him to look forward to his future and anything more he can acquire. This is vividly contrasted by the diction she uses for the caged bird. For the caged bird, readers can notice that the verbs that Angelou uses are dark and intensify the sadness of the caged bird’s situation. They are verbs that are often associated with grim atmospheres. They highlight the horrors of captivity that the bird is experiencing at the moment. Moreover, Angelou uses “ bars of rage” to create a difference between the free bird’s happiness and the caged bird’s anger, frustration and fear. Notice how she uses “bars of rage” instead of “bars of his cage.” This shows how the caged bird is not only confined in the physical world by the cage but also in his mind. He is stopped from feeling emotions other than anger, sorrow and horror. Not only his physical body is imprisoned. It’s also his mind, his ambitions, his dreams of becoming a part of the world outside the cage. His mind is suffering in this confinement. It is trying to let out the bird’s quivering, dead voice with all of its energy. It’s trying to let out a “trill”, a cry for help out into the world. This shows how captivity and denying someone’s freedom leads to the anger of not being able to escape and be a part of the rest of the world. Angelou’s choice of words here also shows a significant concept of how captivity can ruin one’s life and shows how the caged bird’s situation is very different from the free bird who is enjoying his environment while being free to feel the way he wants about himself and the world around him. Since Angelou was a part of the Harlem Writer’s Guild and used her poems as protest, readers can understand that the inclusion of the caged bird singing with the “trill” along with the “bars of rage” that the bird is confined by represents the African American people’s effort to have their voices heard and stop discrimination.

In conclusion, we can see how Angelou’s unique and important choice of words and imagery contributes to the way she approaches the idea of freedom. She does this by highlighting the differences between captivity and freedom while using the poem as a whole to represent the struggle of the African American to escape the captivity of oppression that they faced in society.