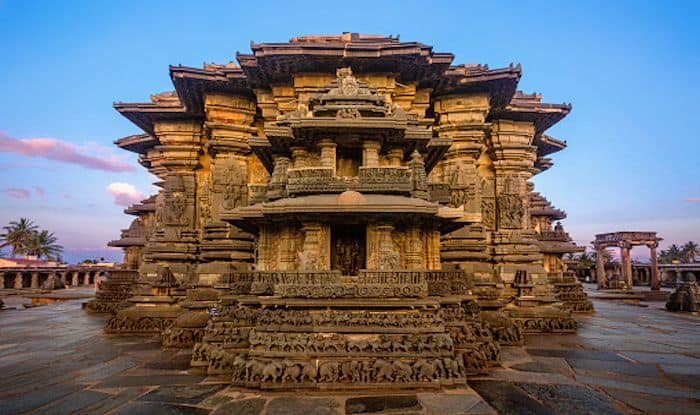 In the land that homes the mighty range of Sahyaadri, the graceful yet turbulent Kaaveri, the majestic Jog Falls, the exquisite monolith of Shravanabelogala, the remnant architectural marvel of the erstwhile Vijayanagara Empire- Hampi,  lies yet another spectacle- the Chennakeshava Temple in Belur. Built in the 12th century, this hasn’t just stood the test of time, but is also a display of the artistic prowess of the Hoysala dynasty.

The name Hoysala comes from Kannada folklore, which tells the story of Sala, a warrior who, to save his teacher and mentor Sudatta, battles and kills a lion. It is said that, just as the lion was spotted, Sudatta commanded ‘Hoy, Sala’ literally meaning ‘Strike, Sala’. Thus, the empire came to be known as Hoysala, honouring its noble founder. Carrying on the valour of his ancestors, was another king of the lineage, Vishnuvardhana. He commissioned the Chennakeshava temple dedicated to Lord Vishnu in 1117 CE, a temple considered as one of the “five foundations” of his legacy. This temple, shaped in the form of a star, took 103 years to build. It has exquisite artwork on its outer walls adorned with bracket figures depicting the Puranas and Epics, all carved to perfection. There are almost 4000 carvings in the shrine, none the same as the other!

As we enter the temple, a structural representation of Sala battling a lion, which is also the emblem of the Hoysala dynasty, greets us inside. The lower frieze has a series of charging elephants and horses; the elephants symbolize courage while the horses are for speed. The striking, most exquisite visuals here are the 42 bracket figurines known as Shila Balikas, Shalabhajnas, or Madanikas. These are structures of chaste maidens are intricately carved depicting postures with minute details of costume, makeup, ornaments and expressions. King Vishnuvardhana’s wife, Queen Shantala Devi, a patron of art and a dancer herself, considered the epitome of feminine beauty was taken as the primary inspiration for these figurines. It is worth mentioning that a Queen, herself demonstrated the freedom of expression in the highly conservative society of that period.

Right outside is a sculpture, called the Gravity Pillar. It is carved out of a single rock and stands in its own weight. You can actually swipe a piece of paper across it. As the exquisite exterior is embellished by extremely fine sculptures, the craftsmanship inside is much finer. The sanctum has a magnificent 3.7 m tall image of Lord Vijaya Narayana in black stone. The prabhavali (structural aura) of this idol has the 10 avatars of Lord Vishnu, wrought very perfectly. The doorway with the dwarapalakas (guards) is very elegantly carved. The Garbhagriha (the sanctum) is stellar in shape and its zigzag walls make the figures of 24 forms of Lord Vishnu look different at different times of the day due to the light and shade effect. One can see the lathe-turned pillars highly polished and intricate carvings even in the dark and no two pillars are alike.

“With your hands folded at the door

This is a shrine, not of stone

But, a web of artistry”

“The obelisk is enchantingly narrating

As sage Badarayana, the tales of India

Are being sung here.

In an unconscious state,

The substantial world is levitating”

A unique aspect in this is that the artist has left a small space blank – it is believed that it is a challenge to others to do a better carving and to convey that art never dies, it is infinite. The Chennakeshava Temple is referred to as Kalasagar (ocean of artistry) for its breath-taking carvings and fine sculptures. The beauty is so expressive that one can literally breathe art. It is a shrine alive with an authentic display of skill and craftsmanship. Even the 644 elephants here, each different, are not enough to carry the awe, the wonderment of people experiencing this temple’s beauty. The Chennakeshava temple is one of the foremost examples of spiritual expression we can find amongst the numerous treasures that exist in India.