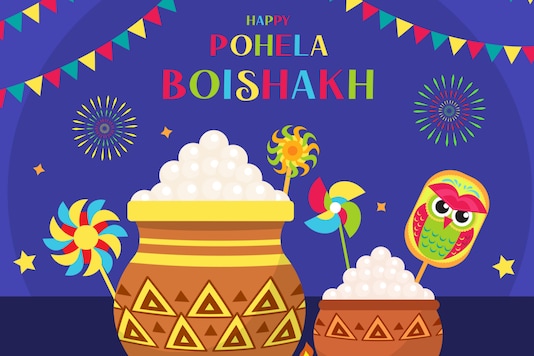 Bengalis often utter a proverb called “Baro mashe, tero parbon”. The word ‘parbon’ means festivals and ‘mash’ means months in Bengali. The proverb simply means that there are more Bengali festivals than there are months to fit them in.

It is quite funny that even though there is a shortage of room for certain festivals yet the Bengalis celebrate every festival with equal grandeur. Bengalis and Durga Pujo have become quite synonymous but then Poila Boishakh or Bengali New Year is a festival that is no less than Durga Pujo. Bengalis are all smiles during this time. It’s the season of joy, laughter, happiness and most importantly togetherness in Bengal.

During this time, all Bengalis return to their hometown irrespective of the place they are settled in. They do all of it just to start the year with their near and dear ones around! Bengalis are born foodies and thus, every festival of Bengalis have a connection with food. Lakshmi and Ganesh are considered gods of wealth and luck. Due to this reason, they are worshipped by the Bengalis during the beginning of the new year. Poila Boishakh or 1st Boishakh marks the beginning of the economic year for all Bengali businessmen and women. Thus, on this priests perform a Lakshmi and Ganesh puja and then a ‘swastika sign is drawn using vermillion by the priests on a new notebook. An impression of a one rupee coin is also made on the notebook. This tradition is called ‘Hal Khata’. The one-rupee coin is considered to be lucky and prosperous for the business community for the year ahead. The new year is also often welcomed by singing Bengali songs such as ‘Esho Hey Boishakh’ in many institutions and gatherings. All Bengalis greet each other by saying Shubho Naboborsho and everyone wears new attires during this happy time.

It will be the 1428th Bengali year this Poila Boishakh. May the new year bring prosperity, happiness and good luck to everyone’s household.