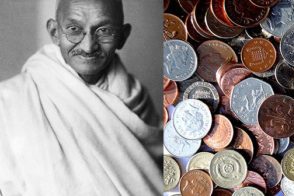 Everyone knows Mahatma Gandhi. He was an instrumental figure in Indian politics back when India ­was enslaved and was a great freedom fighter. His philosophy of non-violence and satyagraha shook the world and he is the inspiration of all the leaders till today. He lived a simple life and practised what he preached. He is known as the Father of our Nation and rightly so. Even a small kid knows about our dear Bapu and how he changed India and the world.

According to reports, the Royal mint advisory is planning to mint this coin. The decision to mint our dear Bappu was taken amongst the growing interest in contributions from the BAME (Black, Asian and minority ethnic) communities in the UK. These communities have a pivotal role in shaping the UK since the very beginning. Hence, the UK government wants to express its gratitude for these communities.

Rishi Sunak, the British Finance Minister of Indian origin has supported this campaign and believes that these communities should get the homage they deserve. In a letter, he asked the Royal Mint Advisory Committee (RMAC) to pursue recognition of individuals from minority communities, according to an emailed statement from the UK Treasury. Sunak, in his letter, “said members of the Black, Asian and minority ethnic (BAME) communities have a ‘profound contribution’ to world history and should the committee should consider recognising them on UK’s coinage”.

Even though many people believe that Gandhiji must be provided homage, some British officials aren’t very pleased with the government’s decision. They feel that Gandhiji doesn’t deserve the coinage and aren’t supporting the same. These officials argue that a figure that is connected with UK politics in more depth would be a more suitable choice. Zehra Zaidi, who’s communication triggered this coinage concept and the first place is now distancing herself from this campaign. Zaidi, a descendant of Sayyid Bashir Hussain Zaidi, a member of India’s first Lok Sabha, said that he was not on the proposed list of names she had sent to Sunak. The list included Khudadad Khan, the first British Indian soldier awarded the Victoria Cross, and Muslim British-Indian WWII spy Noor Inayat Khan. “We never pushed Gandhi,” she said.

At the same time, the Indian embassy is elated at such news. They were happy that Gandhi was being selected for such a prestigious thing.

Now, upon hearing both the sides of the story, I would like to know what your opinion is on this topic. Should Gandhiji be minted on the coin, or shouldn’t he?