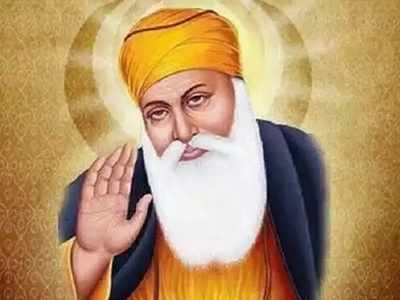 Guru Nanak Ji was born in 1469 in Talwandi (now in Pakistan known as Nankana Sahib). The name of his father was Mehta Kalu and the name of his mother was Tripta. His father (Mehta Kalu) was a revenue official. Guru Nanak was gentle and innocent from the very childhood. While the children of his age would play, he would sit in meditation in a corner of the house. He was never interested in studies.

One day, his father, after consulting his wife, told Guru Nanak “Nanak, now you are a grown-up boy and we want you to stand on your legs.” After saying this, his father handed him 20 rupees and said, “These are twenty rupees, invest them in some profitable business. I want you to earn profit by fair means.” Nanak took the money and went searching for a business in which he and his family could get some profit by fair means.

He came across a grove. There he saw some saints, sitting in meditation. They seemed to be indifferent to the whole world. At that very moment, Nanak remembered his father’s words to invest these 20 rupees in some profitable business. He quickly went to the nearby village and brought some fruits for the saints. He served those fruits to the saints in a proper manner. The saints had not eaten anything from many days.  They ate it and blessed Nanak as well as his family. He bowed his head and returned home.

When his father came to know that Nanak had spent his hard-earned money to buy fruits for the saints, he became very angry. Mehta Kalu slapped Nanak barely. “Father, you told me to invest this money in some profitable business. What can be more profitable than those saints blessings.” Nanak told his father, innocently. But his parents could not get it. So, to create feelings in Nanak his parents married him with Sulakhana, daughter of Mooldhan, a resident of Batala. Nanak and Sulakhana really enjoyed their married life for six years. They had two sons. Nanak was not interested to live like a common man. He spent most of his time in meditation. He always said, “I LIVE IN MEDITATION, WITHOUT THAT I WOULD DIE.”

So, this is how GURU NANAK JI became a saint. I also hope that you have learned a lot from GURU NANAK JI and a lot about him too. Let me tell you about another incident which happened in his life.

Once Guru Nanak was staying in the house of a poor worker. His name was Lala. Lala would serve Guru Nanak dry chapattis with sauce. Nanak would eat it happily without any objections. A brahmin named Malik Bhago of the same place organized a religious sacrifice followed by a dinner. He also invited Guru Nanak to the grand dinner. Though unwilled, he went to the dinner as he was invited many times.

Malik Bhago said “Guruji you are born and brought up in a Khatri family. Is it right that you are living in a house of a Shudra?” Lala was standing just behind Guruji. Guru Nanak took dry chapatti from Lala in one hand and yummy kachori from Malik Bhago in the other hand. Guruji squeezed both the food items.

In the last days of Nanak’s life, he stayed in Kartapura for 3 years. He, unfortunately, died on 22 September in the year 1539. He was the first Guru of the Sikh religion.