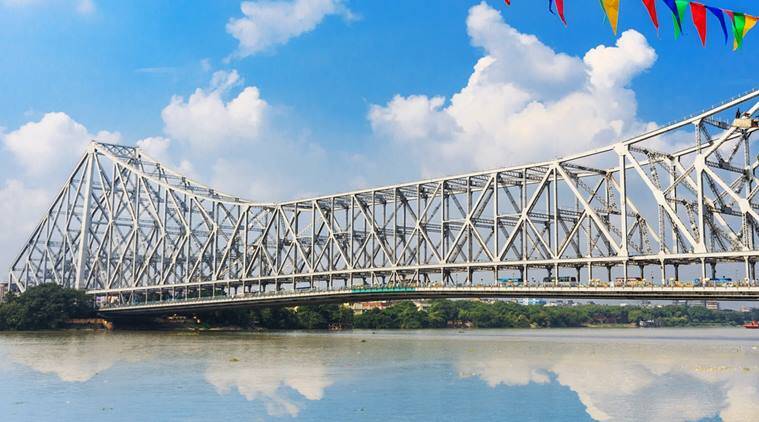 What Rasgulla is to a Bengali is what Howrah Bridge is to Kolkata. The story of this 79-year-old bridge goes back to 1862 as Calcutta, the then capital of British India started growing busier each day. The need for strong connectivity between the two principal districts, Howrah and Calcutta, which were separated by the Hooghly River, became important.

This engineering marvel was built by riveting 26,500 tons of high-tensile alloy steel. It is astounding to note that the bridge does not have any nuts and bolts. It carries a daily traffic of approximately 100,000 vehicles and possibly more than 150,000 pedestrians, making it one of the busiest cantilever bridges in the world.

The Howrah Bridge connects the twin cities of Howrah and Kolkata. Standing at the edge of the bridge you can experience the true essence of the  ‘City of Joy’. An enjoyable riverscape of Kolkata can be viewed from here. A calm flow of the Hooghly lies underneath the structure fringed with dingy boats on the banks and ferries moving across the harbour. The bridge is constantly busy with vehicles varying from modern cars to the yellow ambassador taxis and hand-pulled rickshaws native to Bengal. There was a time when trams also used to ply on the bridge. Pedestrians rushing towards Howrah Station to catch their trains are a common sight. At the other end of this bridge lies the Malik Ghat Flower Market, the largest flower market in the world. It is a beautiful amalgamation of colours and crowds.

My connection to this city is just as strong as the bridge’s foundation. Though not a Bengali, being born and brought up in Kolkata automatically binds me to its roots. The citizens of this city take immense pride in its cultural heritage and carry it along to every part of the world. The food and traditions of Kolkata speak for themselves beyond borders. The variety of street delicacies always makes you long for more.

The Howrah Bridge plays an integral role in Bengal’s history and it coincides with both the World Wars. During the Second World War, there were many failed attempts to destroy the bridge by Japanese fighter planes, but the bridge survived due to the swift action of the 978 Balloon Squadron that set up huge balloons attached to the ground by steel cables. These balloons prevented fighter planes to lower enough to hit the target whereas the planes would crash after getting stuck in the cables.

The Howrah Bridge links the past and present of Kolkata. Right from being the national capital to where the city stands today, it has seen it all. The lights adorning the riveted steel is all a part of the wondrous experience. Howrah Bridge is not only held together with steel cables but also thrives on the true spirit of Bengal.