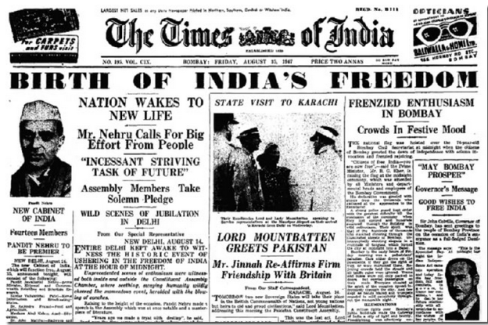 Many of us do not know this, but the map of India was not what it is today on 15 August, 1947 when India became independent.

This was not acceptable to Pandit Nehru and Sardar Patel. Patel was entrusted with the task of getting all these princely states to agree to join the united dominion of India. Over the next few months, Patel and his secretary VP Menon, used a combination of persuasion, cajoling and if need be force to get almost all of these states to sign a document called the Instrument of Accession. This stated that they were agreeing to join India.

However, when India became independent on 15 August, 1947 there were three major states which hadn’t yet signed the Instrument of Accession. These were the states of Hyderabad, Kashmir and Junagadh.

Jammu and Kashmir was a large state covering 85,000 square miles, with a population of 1 million people. It was especially strategic for India because it bordered both China and Pakistan and was very close to the Soviet Union. The crown jewel of the country would give India a significant advantage in the region.

The king of Kashmir was Maharaja Hari Singh, a Hindu, governing a state with three-quarters Muslim population. This put him in a dilemma. He wanted Kashmir to be independent, but both India and Pakistan were putting pressure on him to accede. Pakistan signed a standstill agreement with Kashmir similar to the one India had signed with Hyderabad. However, Pakistan violated the treaty a few weeks later, when they pushed Pashtun tribesmen into Kashmir to try and take control of the state. They were actively supported by the Pakistani army who later got involved too. The tribals reached almost as far as Srinagar, the capital of Kashmir.

Maharaja Hari Singh begged for India to help him. Patel agreed to help but only on the condition that he sign the Instrument of Accession. Once the Instrument of Accession was signed, in October 1947, Indian troops were airlifted to Srinagar to fight back. Another day’s delay and the tribals might have actually captured Srinagar and taken control of Kashmir. As we are all aware, Pakistan refuses to accept Kashmir as an integral part of India and the two countries have fought 3 wars over this.

Occupying an area of 82,000 square miles and having a population of 16 million, Hyderabad (which currently covers all of Telangana and parts of Karnataka and Andhra Pradesh) was ruled by “His Exalted Highness”, the Nizam of Hyderabad. He was a Muslim ruler in a state with 85% Hindus.

The Nizam himself wanted independence for his state but the British denied him that option. His next choice was accession to Pakistan. However, both Patel and Nehru could not afford a part of Pakistan within their country. In August 1947 the Nizam signed an agreement with the government of India to maintain status quo for three months. This time was given to him to contemplate over his final decision, but to Nehru and Patel accession to India was the only acceptable decision. In November 1947, after three months were over, Patel and Nehru again insisted that Hyderabad accede to India. However, under pressure from Lord Mountbatten (the first Governor General of free India), they agreed to another year of standstill.

Soon after Mountbatten resigned in June 1948, Patel decided to take matter into his own hands. By September of 1948 he had ordered the Indian army to march into Hyderabad. This operation was codenamed Operation Polo. After four days of fighting the rebellious Hyderabadi Razakars, the Indian army successfully captured Hyderabad and the Government of India took control over the state.

Junagadh was the last state to have not been part of India on 15 August, 1947.  It was a sea-facing state east of Porbandar, the thumb jutting of present-day Gujarat. The Nawab of Junagadh was again a Muslim but his population was predominantly Hindu. The Nawab would probably have joined India, but in May of 1947 a curious change in Junagadh’s administration turned things around.

The Nawab was in Europe for holiday and had left Sir Shah Nawaz Bhutto, Dewan of Junagadh in charge. Bhutto was a well-known supporter of the Muslim League, which had propped up the two-nation theory and was largely responsible for the creation of Pakistan. He was in close contact with Muhammad Ali Jinnah, the leader of the Muslim League, who was not prepared to let Junagadh go without a fight.

Jinnah thought that Junagadh would be a good pawn to get Patel to give up Kashmir. Obeying Jinnah’s orders, Bhutto convinced the Nawab to accede to Pakistan. On 15 August, 1947 Junagadh announced its accession to Pakistan. A month later Jinnah accepted the accession and Junagadh was officially part of Pakistan. Patel and Nehru were completely taken aback and tried all means possible to get Junagadh back. They sent back a telegram to Pakistan stating that they would agree to the accession but only if the vote of the people was taken into account.

The Indian army was sent in to take control of Junagadh so that a fair election could take place. The Nawab and Bhutto ran away to Pakistan and Junagadh quickly surrendered. In February 1948, a referendum took place. Out of close to 2 lakh registered voters, only 91 voted in favour of acceding to Pakistan. And so, that last missing piece of Junagadh was now in Indian control.

There were three other territories on the map which were still not part of India as of 15 August, 1947. These were Sikkim, Pondicherry and Goa, Daman and Diu. These territories became part of India much later, but that is something we can cover another time.

It is difficult to imagine what India would have been like with the gaping hole of Hyderabad, without Kashmir and without Junagadh, the thumb of Gujarat. We are forever grateful to Sardar Vallabhbhai Patel for integrating the 565 princely states and forming the dominion of India.