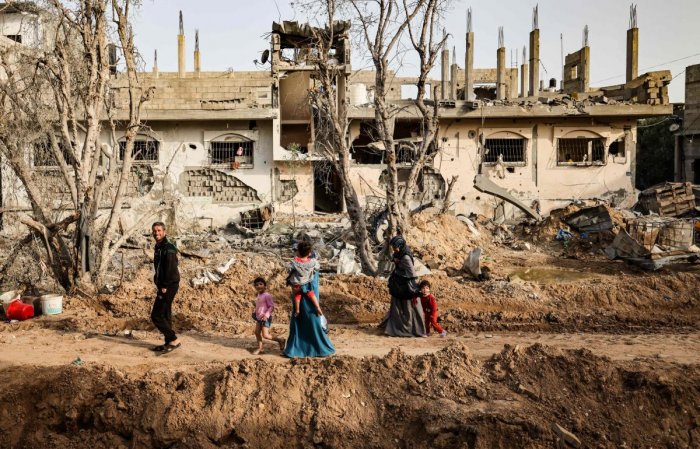 The Israel – Palestine conflict has been going on for decades with the most recent outbreak of violence last month. It was marked by protests, riots and rocket attacks by Hamas along with Israeli airstrikes targeted on the Gaza strip. This violence continued for 11 days until an Egypt-mediated ceasefire was established on 21st May. The conflict was triggered on 6th May, when Palestinians began protesting in east Jerusalem in anticipation of the verdict of the eviction of six Palestinian families from Sheikh Jarrah (a land annexed by Israel but a part of occupied Palestinian territories).

Brief about the origin of the truce

Soon, the dispute escalated. From throwing stones at officers to violent airstrikes and rocket fires, violence ensued on both fronts. Around 270 people were killed and over a thousand injuries. This prompted international reactions and protests around the world.

After France, Egypt and Jordon filed for a United Nations Security Council (UNSC) resolution for a ceasefire, the 11 days of violence ended with a truce between Israel and Hamas on 21st May with both sides claiming victory. The news of this ceasefire was met with Palestinians taking out celebratory gatherings across the occupied territories and Israel removing the emergency restrictions in areas hit by rockets.

So, what led to this ceasefire?

The Israeli troops were hesitant of launching a ground invasion this time, unlike in 2014 when the last major fight between Israel and Hamas took place. This is because, while a ground invasion allows Israel to inflict more damage on the Hamas, it will also result in increasing the risk of losing Israeli soldiers. And so, this time, the major aim of Israel’s military campaign was to inflict maximum damage using airstrikes. Israel succeeded in carrying out 1800 airstrikes on Gaza in the first 10 days.

However, the use of airstrikes resulted in another problem. Offensives focused on air power need a quicker exit strategy and will result in disproportionate civilian causalities. Hence, the inordinate airstrikes inflicted greater damage inviting international pressure. Israel attempted to sell the narrative about how it is a “victim of terror”, but the fact remains that Israel is the only sovereign power in this conflict, which continues to occupy Palestinian territories. This is against UNSC resolutions, international laws and norms.

So, when civilian casualties in Gaza began to mount, even countries that initially supported Israel’s “right to defend itself” began to call for a ceasefire. Most countries in the UNSC backed an immediate ceasefire. The Biden administration, which was under intense pressure from the Democratic Party’s liberal wing, issued a strong statement on Wednesday calling for “significant de-escalation.” Israel itself was under internal pressure as riots between Jewish vigilantes and Arab mobs gripped its streets. Protests erupted across the West Bank, and rockets were fired from Lebanon’s border. On Thursday night, amid rising pressure from all sides, Israel’s Security Cabinet unanimously approved the recommendation of a “unilateral and mutual ceasefire” with Hamas.

What did Israel achieve?

During the conflict, Israeli Prime Minister Benjamin Netanyahu stated that there were two ways to deal with Hamas, one to conquer Hamas which was an “open possibility” and the other to establish deterrence which was his aim. “Deterring” someone is essentially discouraging them from doing something by instilling doubt or fear of the consequences. Israeli military leaders have claimed that they have killed 225 members of Hamas and Islamic Jihadi groups while disrupting Hamas’ elaborate tunnel network and other militant infrastructure. Netanyahu believes that the Israeli’s have “set Hamas back by years”.

Hamas has indeed endured far more damage than what its offensives inflicted on Israel where 12 people were killed which is far less than the deaths the opposite side received. Though only in the coming years can we know for sure if Israel has successfully established deterrence. This is because despite the heavy losses Hamas suffered it continued to fire rockets and offensives into Israel until the very end. In fact, on the eleventh day, Hamas launched 300 rockets into Israel.

What was Hamas’s strategy?

Hamas was seen to be making a political point when Israeli forces attacked the Al-Aqsa Mosque in East Jerusalem. The point being that it is the real defender of Jerusalem. Hamas tried to grow the Palestinian resentment against Israel in a particular direction – exposing Israel’s rigid dominance or high-handedness. They succeeded in doing so as Israel faced unprecedented protests and riots both in the occupied West Bank and Israeli cities when the Gaza attack was underway.

Despite the heavy losses Hamas suffered, it demonstrated its growing rocket fire capabilities. It launched at least 4,000 rockets in 11 days, more than the 3,383 rockets it fired during the 50 days of conflict in 2014. It also managed to overwhelm Israel’s Iron Dome defence system and cause more civilian deaths by launching barrages of rockets in a matter of minutes.

The effects of the Truce and next steps

Ceasefires can be fragile and tenuous. Hamas states that the truce was accepted since Israel promised “to lift their hands off Sheikh Jarrah and Al-Aqsa Mosque.” Though the Israeli side has denied any such promise and highlighted that the ceasefire was unconditional. Israel has already removed some restrictions it had imposed on Al-Aqsa, but the matter of Sheikh Jarrah is more complicated. If the Supreme Court of Israel goes ahead with evicting the Palestinians, there could be more protests and fights.

As we all hope that this ceasefire continues, the truce does not tackle the underlying issues between Israel and Palestine. Moreover, previous ceasefires have only continued for a short time before rocket attacks resumed like in 2014.

This time round, the Israeli Defence Minister Benny Ganz said that Israeli defence would maintain its readiness to protect Israeli citizens and warned that the “reality on the ground” will determine what happens next between Israel and Hamas.