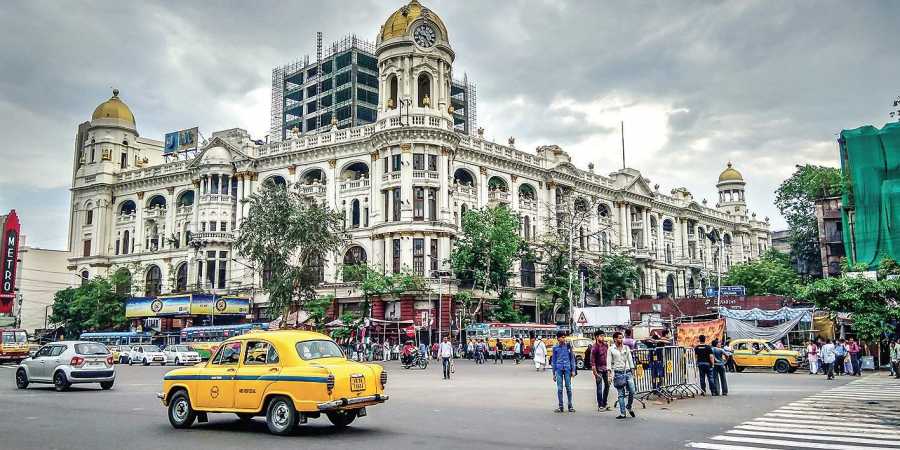 The city of dreams, the city of unhindered zeal and fervour, Kolkata is the heart of India. It is a magnificent city characterized by august rivers, handsome bridges, stupendous and majestic monuments, and the hustle – bustle on streets. This city is a living megacity which boasts of culturally rich ethnicity and exemplarily awarded leaders and laureates. This city has witnessed ancient, dignified and omnipotent dynasties rise and fall and has had innumerable rulers from the primitive period to the medieval British Viceroys and the contemporary leaders.

The real heart of the city lies in its people. The people of Kolkata are ‘food lovers’. The succulent and luscious delicacies including ‘Kosha Mangsho’, ‘chingri’ and ‘ilish maach’, ‘Shukto’, ‘Phuchka’ and mouthwatering sweets like Rasogullas and chomchoms provide prominence to the city. The capital of West Bengal, Kolkata is also one of the four metropolitan cities of India. Being a hub of culture the ‘City of Joy’ sways in exuberance and ecstasy in October, during the auspicious occasion of Durga Puja. The people remain engrossed in various activities throughout the ten days of the festival. They engage themselves in pandal hopping, worshipping the idols of the Goddess and satisfying their hunger. The luminescence and embellishment in the city throughout the year are most praiseworthy.

One can experience and explore all the colours of life in this city. The city is prominent for its heritage, literacy and art. The legendary filmmaker, Satyajit Ray and the distinguished and eminent poet and author, Rabindranath Tagore come from this city. Renowned Bollywood actors like Rani Mukherjee and Mithun Chakraborty also belong to this city. No one can forget to mention the Prince of Kolkata – ‘Sourav Ganguly’. Some sundry other significant monuments and obelisks give this city a sign of special recognition; Victoria Memorial, Shaheed Minar, Fort William being some of them. The memorable Howrah Bridge and the captivating Vidyasagar Setu which lie on the banks of the river Ganga exhibit the splendid architecture of the city. At evening, one can glance upon the resplendent sea-green river waters, the boats returning to the shore and experience the serenity and tranquillity while in the Princep Ghat. Kolkata was the first city in India to offer underground metro services. Moreover, travelling within the city is quite convenient as one can avail traditional hand-pulled rickshaws, trams, yellow taxis and steamers. The scenery is always yellowish blue in Kolkata.

There are delights and surprises at every moment in this city. If one is taking a train to Kolkata, the fuss at the Howrah Station is sure to raise his spirits who gets attracted by the balloon sellers, the sweet shops and the florists. The city also has many museums and galleries. The Indian Museum, for instance, is the largest museum in the country and the National Library is also a place for rejuvenation for avid readers. Cathedrals (like St. Paul’s Cathedral), temples (like Birla and Kalighat Temples) and mosques are scattered throughout the city. Kolkata is a city with a soul that truly cares. One must pay a visit to The ‘Missionaries of Charity’ or other old age homes and orphanages. The greatest possible attraction of the city is the horse carriage (Tonga) ride which is a must. There is no end to amusement in this city. The colonial relic is still intact with the names of countless dense streets in Kolkata. And, it doesn’t end there.

The Alipore Zoo and Botanical Gardens are perfect sites for nature lovers. Thousands of creatures and plants are found in these sites, making Kolkata intensely exquisite. The Eden Gardens and the Salt lake Stadium are world-famous stadiums where numerous celebrated players have made records. It is also an ideal place for shopping. Tourists from around the globe visit New Market, Burr Bazar, and Maidan to shop. With the arrival of Christmas, the city is full of glee and a visit to Park Street to view the lightings and ornamentations is a compulsion for many. This city was and is also home to many freedom fighters and reformers like Netaji Subhash Chandra Bose, Rani Rasmoni and Raja Ram Mohan Roy.

The culture of Kolkata is strengthened when the citizens take pride to speak and converse in the regional language, Bengali. The best part of the city is its affordability. The city can be equally enjoyed by the rich and the poor. It offers great quality and services at minimal rates.

However, every rose has a thorn. With the rapid growth in industry and technology, the city is experiencing modernization. However, a major problem that this city has been facing for these recent years is pollution. Air pollution from factories and engines being the chief medium, other types of pollution are also prevalent. The increase in slums which serve as pockets of poverty and sundry other aspects perhaps makes this city no different from the other metropolitan ones. The regular traffic on roads and the huge population are other negativities that prevail. However, the positives inevitably outweigh the negatives. Kolkata is a city that cannot be compared with others. It always opens its heart and embraces me and I grasp the love that it delivers for me.

“Kolkata is not for everyone.

You want your city clean and green, stick to Delhi.

You want your city rich and impersonal, go to Bombay.

You want them hi-tech, Bangalore’s your place.

But if you want a city with a soul, come to Kolkata.” – Vir Sanghvi