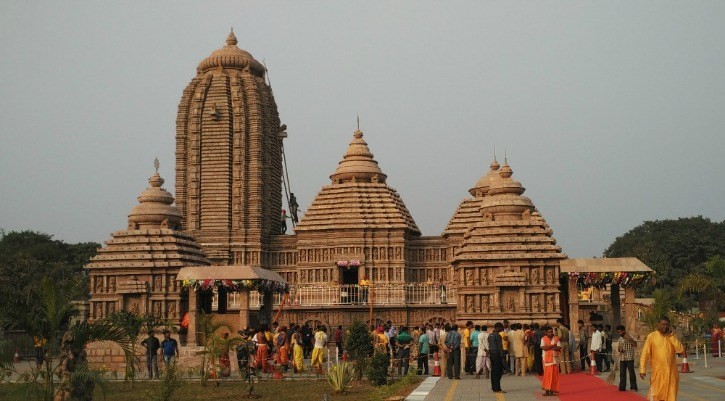 Just like Bengalis and delicacies are cheek by jowl with each other, one can always draw a parallel to the immense penchant Bengalis have for travel. And being a busy beaver, even if he cannot globe-trot, any true Bengali yearns for a short yet rejuvenating trip to Puri. The dancing sea with its wild waves, the crystal currents, the placid blue water and the sniggering sun ablaze, the gentle, gnarled coconut palms, and the golden beachside soil create an air of bliss and ecstasy among the pilgrims.

And having visited the place during my short summer break a few years back, my parents couldn’t refrain from fulfilling their enduring desire of visiting the historic and acclaimed Jagannath Temple. From our sojourn next to the seaside, we hired a rickshaw and set forth to witness the wonders of the esteemed Hindu temple.  Hardly had we covered a fair distance when the rickshaw-puller refused to advance any further. Neither could we glance at the summit of the temple nor notice the famous flag flutter in the soothing wind atop the monument. Livid and frustrated, we ambled down the street which connected another broader thoroughfare comprising lakhs of devotees waiting eagerly for their chance to enter the Lord’s abode.

A cohort of devotees had thronged in large numbers and we were somehow a part of it. I know not whether it was fortunate or not but the only terrible feeling that perturbed me then, I can well reminisce, was the searing heat that made the atmosphere unbearable. Although I sweltered profoundly, I was astounded to find that every other worshipper was still keen to kiss the holy shrine of the Lord. I was even willing to retreat any moment but realizing that my parents were determined to worship Lord Jagannath at any cost, I did not reciprocate my feelings.

There was no dearth of beggars on the street. From venerable and wrinkled women in rags to young unclad boys, their forlorn faces clearly proclaimed the misery so prevalent in their lives. We were compelled to offer them a healthy appetite or atleast the means that would prevent them from starving for a few upcoming days.

The holy edifice, however, seemed to me a gift of history. After waiting for almost an hour, we finally gained entry through the southern porch of the temple. As soon as we crossed the threshold of the giant gateway, a blanket of darkness fell upon us. I was enlivened. But, I could hear a hubbub of shouting and laughter behind us.

I was startled to catch a glimpse of the magnificent architecture of the temple. The strange beauty, the mesmerizing buttresses and the vivid designs on the walls of the temple were absolutely stupefying. Having ambled through the Astha Sambhu temple and the Rohinikunda (no more in existence), we also peeked through the Muktimandap. An air of religious fervor surrounded us. The amazing Kalinga architecture yet again, proved its brilliance when we arrived at the Ananda Bazar (temple kitchen). I was driven by terrible hunger at once when I peeped into the kitchen, noticing thousands of men cooking myriad holy delicacies in earthen vessels. A panda approached us informing that the food was to be sold to all and sundry. We couldn’t help ourselves from purchasing a dish and savoring the prasadam of the temple.

And next, we landed up at the much awaited Snanbedi, the bathing platform of the lords. It was the annual festive season and joy and jubilance were all around. The three deities of Lord Jagannath, Lord Balarama and Goddess Subhadra placed on elegantly embellished chariots, were being bathed, a ritual that occurs a fortnight before every Rath Yatra. Every heart was filled with amazement and tranquility.

The pandas however served a source of annoyance. They were unwilling to carry out the rituals smoothly without receiving sufficient funds. I could notice a lady distressed at the arrogance of a panda.

Anyways, our worship of the Lord was successfully over. Lord Jagannath, whom I never knew to be an incarnation of Lord Vishnu himself hopefully, showered his blessings upon me. Most importantly, the holiness so prevalent within the temple had purified my heart. I wished to come here within a fortnight to witness the grand celebration of the Rath Yatra, an auspicious occasion when festive spirits remain high everywhere. One of the pandas had informed as how millions of devotees would gather to pull the chariot ropes of the lord, proclaiming the long-awaited day had begun.  I was assured that foreigners had a good reason to visit Puri, when they wished to celebrate their holiday in India, and not Agra or Delhi.

There is an interesting legend surrounding the origin of this historical temple. The original image of Jagannath was sighted at the end of Treta Yuga, near a banyan tree, at seashore in the form of an “Indranila Mani” or the “Blue Jewel”. Widely acclaimed for its spark and beauty, it was believed that it could grant anyone instant moksha. So Lord Dharma or Yama wanted to hide it in the earth and was successful. In the Dvapara Yuga, King Indradyumna of Malwa wanted to find this mysterious image and so he performed dedicated penance to obtain his goal. Vishnu, satisfied with the king’s devotion, instructed him to go to the Puri seashore and find a floating log to make an image from its trunk.

Having found it, the king performed a yajna from which God Vishwakarma appeared in the form of an artisan and prepared images of Jagannath, Balabhadra and Subhadra from the tree. Following this, the king made three idols out of it and placed them in a pavilion. Vishnu himself appeared to carve the idols on the condition that no one could disturb him when he is at work. But within a few weeks, the Queen became very anxious. She took the carpenter to be dead as no sound came from the temple and requested the king to open the door. Having forgotten the condition, they went to see Vishnu at work at which the latter abandoned his work leaving the idols unfinished. The idol today is therefore devoid of any hands. But a divine voice told Indradyumna to install them in the temple, and worship them as a representative of the Lord. It has also been widely believed that in spite of the idol being without hands; it can watch over the world and be its lord. This myth is still untold to the mortal world but many believe in the real truth of the story.History, however unfolds herself to proclaim that the temple was constructed in the 12thcentury CE during the reign of the Ganga dynasty king Anantavarman Chodaganga. Whatever maybe the case, I cannot deny the fact that the exquisite architecture and features of this temple has brought riches to our country, and how foolish I would be if I had returned from the Lord’s gate without worshipping Him with the excuse of a huge crowd!!!!….