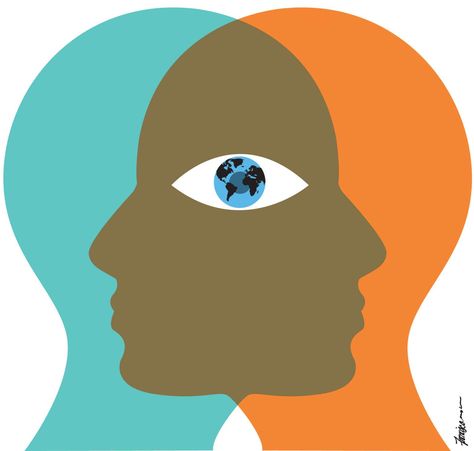 If I were to ask you a question, what would be the one thing that you would like to eliminate or create in this world to create a borderline utopia?

Give yourself some time and think about this question. Some answers could be – remove hunger, free education, eradicate poverty, etc.

All these solutions seem to be impossible. They would require the collective effort of too many individuals. Getting as many people involved as possible required requires a change in public mindset, after which a collective effort of the people to create a plan will be required. And it is highly likely for the plan to take a very long time to be converted into action.

Hence, this calls upon a solution that could invest in changing the mentality of people. The way to make this possible is by understanding perspectives.

Perspective has a variety of meanings, but in this context, it means a point of view. It is defined as the way an individual sees the world.

As this is something that is instilled in everyone, it is easier to change and realize the way we see things.

Perspective is the way we see things, and what we see is what we believe. We see things and act accordingly. But if we are doing something that is going to affect everyone else around us and we fail to consider the result of the outcomes after the action has been carried out then this would be unfair.

Until and unless we take into consideration other’s situations and how it would affect them if such action is carried out, this world will continue to deteriorate.

How is this a solution that would create a borderline utopia or even get close to it happening?

This calls for an example:

Ukraine and Russia. Or we can just take Putin and Zelenskyy for this case.

Only if Putin could put himself in Zelenskyy’s shoes, he would see for himself how it feels to be invaded by another world power and the effects it has on his country and people. And if Putin could also put himself in a common man’s shoes, he’d realize the adverse catastrophe it would create for him and others. If Zelenskyy could put himself in Putin’s shoes, he would understand his patriotism towards his country and his desire to reunite all the countries that were a part of the USSR. You see, it isn’t right to completely be against Putin. Most of the decisions Putin took were from his perspective, and while you might find them jusitfiable or not, it is important to appreciate and understand his perspective.

In every case you have an argument with your parents or anyone coming from a different generation, there will be a communication gap that we are trying to fill during the whole argument. This can only be filled if each person understands where the other is coming from. Anger will only widen the gap even more because it provokes a person to give an immediate response and reaction distracting them from understanding what you are saying. Perspectives here would play a huge role in filling this gap.

Hence if every individual develops a sort of understanding which helps fill this gap, then I think the world would be a better place because small misunderstandings lead to escalation of conflict and cause problems across the world.

There is no harm in putting others first whenever required as we humans need each other.