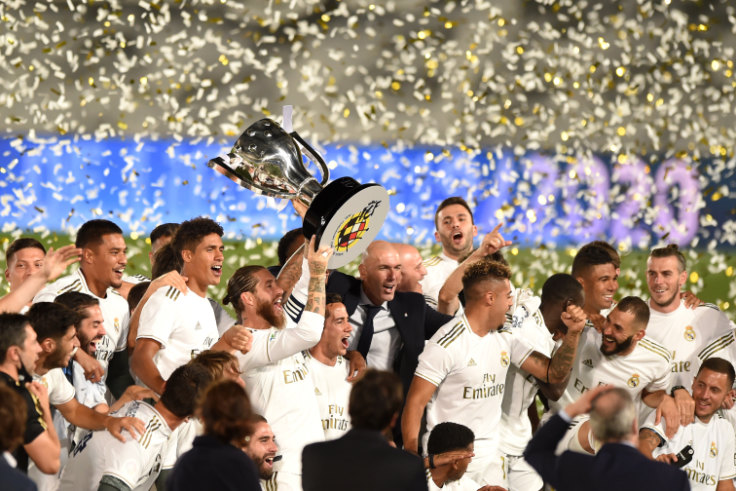 Real Madrid is undoubtedly one of the greatest football clubs of all time. They have left their mark on football history and have conquered Europe, especially Spain, unlike any other team. But this year many claim that they don’t deserve their 34th LaLiga title.

The season was a close battle between FC Barcelona and Madrid. But, due to the coronavirus pandemic, the season came to a temporary halt and all matches were postponed. Entering quarantine on 14th March 2020, Los Blancos were trailing the league leaders (FC Barcelona) by 2 points. But the battle was still raging on as all players were doing their best to stay in shape while stuck at home. While the fitness levels of most other players deteriorated as they came out of quarantine, the Real Madrid squad was only fitter and better than before. They were ready to take on any team that came their way.

Their first opponents were Eibar, a mid-table team which was not much of a challenge for them. Sure enough, they came out victorious 3-1 with Sergio Ramos, Toni Kroos and Marcelo scoring their 3 goals.

Over the next 5 weeks, they were on a winning spree staying undefeated for 8 matches in a row. Now, this is when the controversy first started. People claim that Madrid was only winning matches due to the unfair decisions of the referees and VAR (Video Assistant Referee). Many started calling the club VARdrid. Although they had a winning streak of 8 games, many of those matches were won due to penalties and other controversial decisions made by the referees. Only a couple of matches were left. They had overtaken FC Barcelona and were leading by 4 points. It seemed that the league was theirs to win and nothing would stop them.

Sure enough, they managed to win their next 2 matches while Barcelona lost one of the 2 matches. Here again, the first match had a controversial decision where one of the opponents fouled Marcelo inside the box awarding Madrid a penalty, but when Sergio Ramos did a similar thing in the Madrid box, no penalty was awarded. Many say that it was a different situation as the ball was far away at that time and Ramos stepped onto his leg by mistake. Evidently, the referee thought so too considering his decision.

No one knows for sure what the right decision was but in the end, Madrid won the match as Villareal were unable to equalize. With this win, the race for the title came to an end and Madrid were crowned LaLiga champions. A long hard race in which they came out on top yet again.

Despite winning the title, they are hungry for more and are ready to take on Manchester City in the quarter-finals of the UEFA Champions League. Zinedine Zidane is ready to conquer Europe once more.