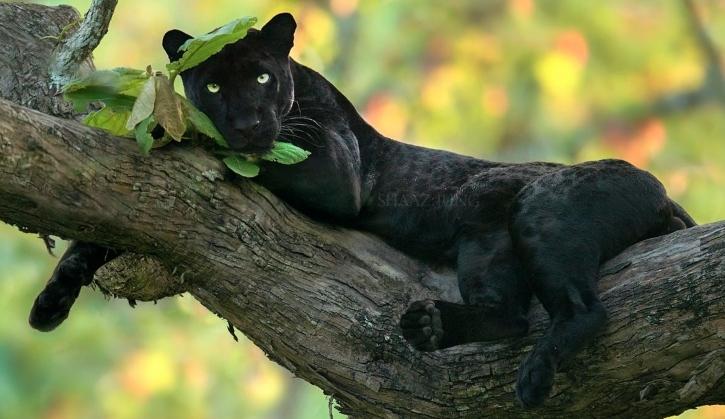 Karnataka’s renowned forest of Kabini is a part of the Nagarhole National Park. The forest is spread out across an area of 55 acres. The place is known for its serene lakes, streams, valleys, flora and fauna. These factors popularize tourism amongst nature enthusiasts and adventure seekers to enjoy the sightings of the wildlife and the lush vegetation.

The sight of a black panther around the forest area perplexed the people wondering how the cat could land at Kabini without any previous records of spotting one. The first photos of the panther went viral over social media. This Black Panther, fondly known as ‘Saaya’, a Hindi word for ‘Shadow’, entices tourists to the dry deciduous forest.

Saaya’s shiny black coat and his sparkling yellow eyes are utter magic that bewitches his visitors. One of the photographers capturing him remarked, “Saaya’s glance towards me was even more dramatic than I had imagined. The sparkling yellow eyes popping out of the black was a thrilling sight to behold”. Visitors thronged to try their chance on sighting him, and many recounted that once a myth had now turned into reality, Bagheera had come alive!

Back as a young and less experienced panther in the forest of Kabini, things were not easy for Saaya. He often had to fight for his territory and his prominent adversary is Scarface- an alpha male. Unlike other wild animals of the forest, who could camouflage themselves from the prey, Saaya’s black coat was dominant in the deciduous forest making hunting tough for him. In the summer months, his black cover would make him uncomfortable with the heat, and thus he mostly enjoys the cool monsoons.

Over time, he grew older and stronger. He has learnt to adapt to the circumstances better and hunt easily. His mate Cleopatra is one of the prettiest leopardesses in the area. They have been spotted together strolling in their fabled abode.

Some lucky visitors have spotted Saaya walking bang in the middle of the road, making their experience an unforgettable one! Saaya is indeed the Black Beauty of the Kabini forests!