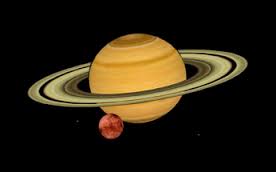 Would you like having breakfast on Saturn, lunch on Mars and then dinner on Saturn? I am sure we all would.

With the population growing on Mars and Saturn, there has been an increasing demand for regular service between the two planets. This has not been possible till now as it has been very difficult and risky to navigate through Saturn’s rings. Now, after three years of successful trials, Mars Saturn Connection (MASAC) launched a regular service between Mars and Saturn using a new technology called the UltraShoot.

The UltraShoot will take between three to six hours travel time depending on the position of the two planets. Each UltraShoot can travel at 10 million kmph due to its special boosters.

The UltraShoot is shaped like a huge mouse. 6,000 people can travel on an UltraShoot. The UltraShoot has 10 motors and it is reusable. It also has four levels.

The UltraShoot will depart and land from an airport like structure called a ShootAir. It is a flat surface which is shaped like the UltraShoot’s base. A mega lighter lights up the boosters of the UltraShoot for take-off.

The ShootAirs have been constructed on the outskirts of each city. This is done to ensure that the UltraShoot doesn’t break or weaken the artificial atmosphere over the cities. A special oxygenated passageway connects the city to the ShootAir.

Michael Toswerty, the CEO of MASAC said – “The UltraShoot will be the safest method of travelling between Saturn and Mars. We got the money needed for this project from NASA and ISRO. The total cost was 4 billion Planetors.”

Jane Notwatch, one of the space scientists working on this mission said – “We got the idea of the UltraShoot when we read a story written by an eight year old. It took us about nine years to design and build this system. We needed 6 million tonnes of steel, so we set up a steel factory and used the iron present in Mars’ crust.”

The first UltraShoot flight was inaugurated yesterday by Lango Gorader, President of Saturn, and Tulsen Nortin, President of Mars, simultaneously, from their respective planets.

This is an excerpt from a book titled Amigos in Space written by Keshav Mohta. To buy it on Amazon Kindle click here.

The Quest of the Gradient Gemstone – Ch 3