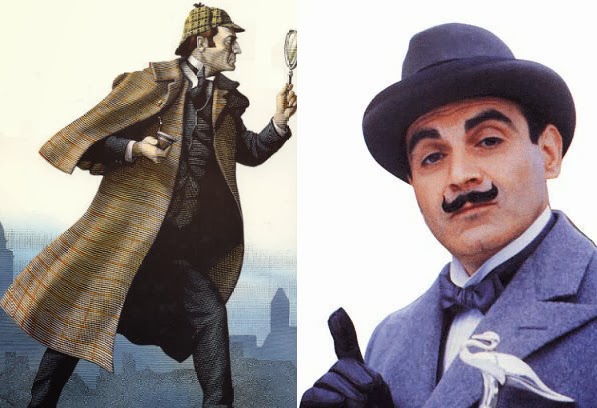 Sherlock Holmes and Hercule Poirot are probably the two best detectives in the world. Created and set in entirely different time periods and locations, both detectives have their pluses and minuses. Agatha Christie has mentioned in writing that the Poirot books have taken a lot of features from the Holmes books but Poirot seems to be an antithesis of Holmes with widely contrasting features. After recently having re-read stories and novels from both detectives, I’ve decided to compare both these once-in-a-century detectives. Disclaimer: this article is entirely based on characters as portrayed in the books, not the movie or show adaptations of the characters.

The first major differences are in the time and place of the two sets of stories. Sherlock Holmes is a detective based in the 1850s and operates entirely out of London. All the crimes happen in and around London. Poirot’s books on the other hand take place in the 1920s and 1930s and travel across Europe. The era makes a big difference with different cultures and different world-views. Along with this, Poirot books cover a variety of country’s with slightly different cultures yet a broadly European theme while the Holmes books have the feel and culture of London emanating from every page.

The looks are integral to the character and their development in the stories. Holmes is a 6 feet tall, well-built boxer while Poirot is shorter and stouter at around 5 and a half feet. Holmes is especially unique because of his trademark travelling cloak and the infamous hat. Poirot is a lot more of a comical character with his large moustache, bald egg-shaped head and green eyes which pop when he’s excited. These contrasting looks bring about the first immediately noticeable differences between both these characters.

Agatha Christie and Arthur Conan Doyle have ensured that Poirot and Holmes find the killer, but their methods are very different. Holmes is a hands-on guy. Using his magnifying glass, measuring tape and other tools he is able to find things not visible to a common. He is also amazing at field work, being able to run around chasing criminals and sometimes defeating them in fist fights. Poirot doesn’t like going in the field. Facts are brought to him on a platter by the police and he analyses these facts using his ‘little grey cells’. He believes that he is above the experts who crawl around desperately finding clues (probably a direct reference to Holmes). He only needs the cold, hard facts, and his little grey cells to guide him to the killer.

Unlike Holmes, Poirot is a great judge of character. Poirot understands both women’s and men’s emotions and can use certain human traits to find where the killer has made a mistake. The best part of most Poirot books is often the interviews where he asks the right questions to throw suspects off guard. And one of them eventually lets slip something they shouldn’t have said, which Poirot catches immediately. Poirot relies a lot on intuition unlike Holmes who always looks for logic. You often read Poirot saying lines like, “I was not satisfied”, “It didn’t seem right”, “It didn’t strike me as true”, etc. However, Poirot’s intuitions are always correct (Agatha Christie ensures that they are).

Sherlock Holmes is also an extremely knowledgeable detective. Apart from outer space and things which did not directly concern man, Holmes knows everything. Anatomy, geology, botany, politics, literature, law and cryptology are just to name a few. His clever disguises also aid him in his detective work. Being a sociopath, he is unable to understand people’s emotions and works out who the killer is using the Science of Deduction which helps him quickly assess certain facts and deduce conclusions. Sherlock also has an amazing memory and is able to remember obscure facts about the case. Along with this, he has built up a network of informants, mainly local street children, to assist him when needed.

Dr Watson and Captain Hastings are the closest friends of our two favourite detectives. Both of them are faithful, aiding Holmes and Poirot whenever needed. Watson and Hastings, both, have a military background, having served in the army at different points in time. They also casually observe the crime scene but seldom spot anything which Poirot or Holmes don’t. Hastings, however, does not appear in every book/story, while Watson is an integral character in the entire Sherlock Holmes series. Hastings also acts a bit like a suck up (this is just my opinion) while Watson is a lot more knowledgeable and has saved Sherlock’s life countless times.

Finally, we come to the authors themselves and what I feel about their writing styles. Arthur Conan Doyle’s books seem a lot more serious with a few jokes while Agatha Christie’s book are riddled with jokes and word play. The Holmes series also has a lot more action unlike the Poirot books where most of the action has already happened and detective has arrived later. It also seems like Conon Doyle’s language makes you sit up and pay attention to the text while you might read Christie’s books on the balcony while it’s raining. This doesn’t take away from the quality of books at all but just gives two very different styles or writing. I have also noticed that Christie is able to hint to the killer many times in her stories and on reading them again, I picked up certain statements which almost give away the killer. Some might call this ‘verbal trickery’ but I believe that it is an amazing addition to the books.

Both Holmes and Poirot have proved their worth and have been able to solve almost every crime presented to them. For those who have never read these books, I would urge you to read at least a few stories and for those who have, let me know if you agree or not.