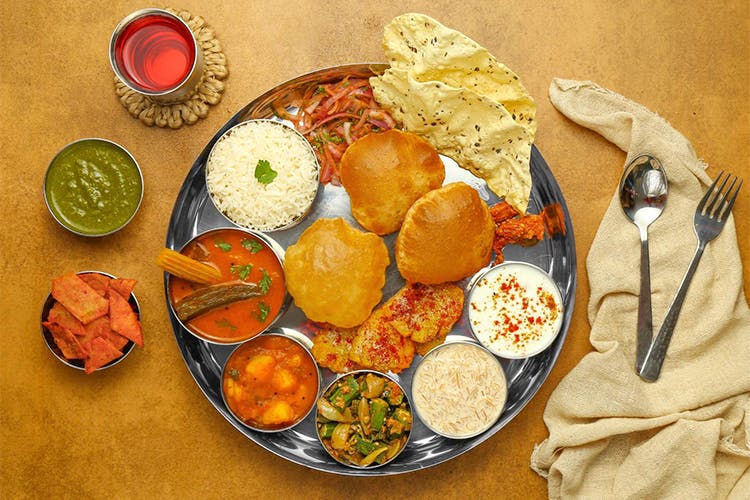 The Sindhi cuisine (referring to the ancient native cuisine of the Sindhi’s) has been influenced by Central Asian, Iranian, Mughal, and Punjabi food traditions. From spicy daal’s and sabji’s to sweet halwa’s, kutti’s and Lola’s, this cuisine consists of a wide variety of dishes. On a daily basis, most Sindhi households eat phulka and rice accompanied by two dishes, one gravy and one dry with curd, papad, or pickle. Freshwater fish and a wide variety of vegetables are usually used in this cuisine.

In this article, I’m going to introduce you to some of the many scrumptious Sindhi delights that I’ve been enjoying since childhood.

1. Sai Bhaji: This is a popular household dish among the Sindhis, it’s a Sindhi vegetarian curry, consisting of dal (lentils), palak (spinach), and other green vegetables. It is a rich source of nutrition due to the various greens. The name of the curry is said to be derived from two words of Sindhi language: Sai (meaning “green”) and bhaji (meaning “vegetables”) , thus indicating the ingredients used to cook the dish. It is flavoured due to its healthy nutrition and simplicity of preparation. Sai bhaji can be served with basmati rice or bread such as koki. A popular serving combination is Sai bhaji & Bhuga rice (caramel rice).

2. Koki: Koki, also known as Sindhi pizza (as we call it), is a popular Sindhi flatbread that is prepared with wheat flour and chopped vegetables such as onions, carrots, green onions & coriander in it. It’s easy to make, and goes well with any dal, sabzi, curd, tea, or even just plain butter!

3. Sindhi Curry: This curry is one of the most popular Sindhi signature dishes.
The curry is a simple vegan dish with an addition of about any easily available vegetable like beans, eggplants, potatoes, tomatoes, peas, carrots & moringa (drumstick). You need only a handful to makeit, but when everything comes together, it forms a perfect combination. It is also full of proteins due to gram (chickpea) flour. Thus making it full of nutrition. We make it with loads of veggies in a chickpea flour base. It is usually served with plain rice, sweet boondi & tuk (double-fried potatoes).

4. Mitho Lolo: It is a thick sweet flatbread made with wheat flour, sugar, and ghee. This is also made with jaggery and requires slow fire cooking as the desert is very thick. Once cooked, it’s soaked in ghee and is best served warm.
These are a portion of traditional comfort food, which can be had during breakfast, as a dessert, or during tea. It is specifically made during a festival called ‘Thadri’ by Sindhi’s.