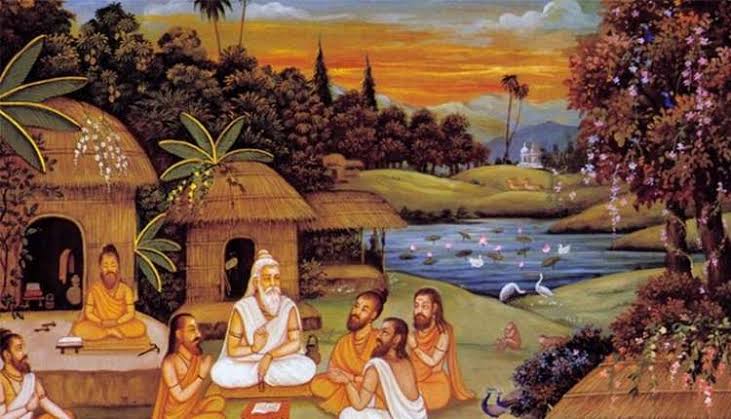 The Indian subcontinent has always been known for its bright minds, glorious past and great rulers. The credit of this glory must be given to its organized and culturally developed education system. With 1.5 million schools and over 250 million students, India has one of the world’s largest education systems. For many centuries, India has boasted of a rich tradition in the field of education and learning. Our country has made many great strides in improving access to quality education and establishing education institutes. With the birth of Educational Technology (EdTech), the field of education is growing rapidly and hence more people will be able to receive a good education. However, many centuries ago, when the word “Technology” was unknown, the people of India followed the Gurukul System. This is considered to be the first education system in India. It was a decentralized system focused on applied knowledge and human values and offered an education that prepares students for all challenges and phases of life.

The term ‘Gurukula’ is a combination of two Sanskrit words, ‘Guru’ (Teacher) and ‘Kula’ (Home or Family). The origins of the Gurukul system dates back to 5000 BC and was prevalent during the Vedic age. The essence of this system lies in the principles of diligence and discipline. This was a residential education system in which the shishyas (Students) resided with their Guru (Teacher) in his Gurukul (Teacher’s home). Admission to the Gurukuls was possible once the shishya had undergone the Upanayana (Sacred thread ceremony) which took place between the ages of 8-12 years. After this, students could reside in the Gurukul and would go on to receive education for 10-12 years. While living in a Gurukul, the students would be away from their home for a period of many months to years at a stretch.

The main focus of the Gurukul system was imparting education to the shishyas in in an environment encompassing brotherhood, love, discipline and humanity. The education conveyed under the system was determined by the cultural and religious practices and was based on experiential learning and practice-based with subjects such as astronomy, medicine, philosophy, political science, economics, religion, yoga, physical education, and defence studies as the major components. The shishyas were not only taught theory through ancient texts but also trained in fitness and were taught social responsibilities as well as how to manage day-to-day living. The shishyas learnt from their Guru and would help the Guru in his everyday life, including carrying out daily household chores. This education system resulted in the all-around development of the shishya and emphasized on a psychological method of teaching.

Shishyas would lead simple and austere lives like their Gurus and were expected to obey and respect their Gurus. Education during ancient times was sacred and due to its adulation, no fixed fee was charged from the shishya. At the end of one’s education, the shishya had to offer a Gurudakshina to the Guru before leaving the Gurukul. It was a token of respect paid to the Guru as a gesture of acknowledgment, respect and thanks to the Guru. The Gurudakshina could be in the form of money or a special task the Guru wanted the shishya to accomplish.

After the British invaded India, the Gurukul education system began to decline. In 1835, Lord Macaulay made it clear that if India is to be enslaved forever, its “Native and Cultural Education System” will have to be demolished and replaced by the “Modern English Education System”. He allowed the use of English and forbid the use of Sanskrit in every Gurukul. Eventually, Macaulay made Gurukuls illegal and the assistance they received from society became illegal too. The Britishers destroyed Gurukuls, set them on fire and imprisoned or killed the Gurus. All the Gurukuls were eradicated and the first convent school was established in Calcutta. At that time, it was called ‘Free School’.Unfortunately, in 1835, the Gurukul education system disappeared and the modern system of English Education was brought to India by Lord Macaulay. One of the biggest flaws about this modern education system is that it is more commercial in nature and is not an institutional concept to impart holistic learning to students. Unlike the modern system, the Gurukul system focussed on applied and practical knowledge, value-based knowledge and the student-teacher relationship. Through this system, students were taught the necessary aspects for an enlightened and disciplined life along with quality education.

Nowadays, the Gurukul education system is obsolete. The modern education system encourages students to compete with one another and be involved in a rat race. There is no emphasis on personality development, ethical training or moral conscience development. Thus, instead of being used to empower the youth, education is used as a tool to make money.

The Gurukul system was an inspiration to many medieval stage universities like Nalanda, Taxila and Vikramshila. Many Jataka stories and travellers such as Huwein Tsang mentioned them in their scriptures. The city of Varanasi has many Gurukuls, Pathshalas and Annakshetras.

All in all, the idea of bringing the Gurukul system back in Indian education is to assist students in understanding the concept of a balanced life. This ideology of balance should be taught to the students from a young age so that they make informed and correct decisions during their life.