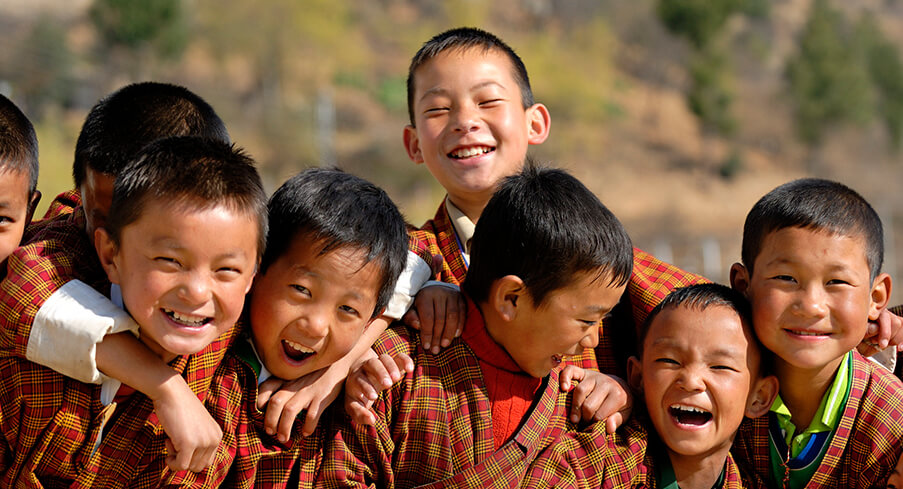 Bhutan is a sparsely populated country that rests in between two densely populated countries, India and China. However, its scenic beauty is mesmerizing to the eyes. The government of this country is said to be unique as it is one of the few democratic monarchies in the world.

His Majesty King Jigme Singye Wangchuk was Bhutan’s fourth king who believed in protecting the culture and traditions by keeping the people’s voices in mind. Thimphu is the capital and the largest city in Bhutan. The current population of Bhutan is around 7 lakh people.

As countries started concentrating on GDP (Gross Domestic Product), Bhutan concentrated on GNH (Gross National Happiness) which solely concentrates on good governance, economic development, culture and environmental conservation. Bhutan is said to measure its happiness as a growth factor rather than being materialistic.

Bhutan being the happiest country has many unique characteristics which make it stand out from other countries. This country also has a Ministry of Happiness to look after the overall happiness of the country.

There are no homeless people in Bhutan. If a person loses his/her land or money due to unavoidable situations, he can approach the king who will donate a small piece of land to that person. Healthcare and education in this country is absolutely free. This makes all students develop into strong individuals despite their economic background. Even the royal family has their children study in the same schools as the locals, emphasizing equality. People in Bhutan were banned from the Internet and television until the year 1999, after which the ban was uplifted. They have a national dress code which is uniquely theirs, where men wear a heavy, knee-length robe called a Gho, and women wear a long dress called a Kira.

And there is also a tradition of wearing scarves over their left shoulders, where normal people wear a white scarf, aristocrats and monks wear yellow scarfs. They take their traditions and cultures very seriously and practice them diligently without any western influence. Their national dish is called Ema Datshi which is a tasty combination of spicy chilies and a local cheese called Datshi. In 2010, a law was passed which prohibited the cultivation and use of tobacco, even foreigners have to abide by this rule. If they want to carry tobacco, they have to pay a hefty amount to the government with a condition that they can’t smoke in public places. Bhutan gives more importance to the ecology keeping it a safe country even for the animals. It is the only country that is carbon negative which simply means it consumes more carbon dioxide than it produces. This is only possible because of the law that 60% of land should be green.

To conclude Bhutan shows happiness matters more than the materialistic things that we crave for in life, making it the happiest country in the world.