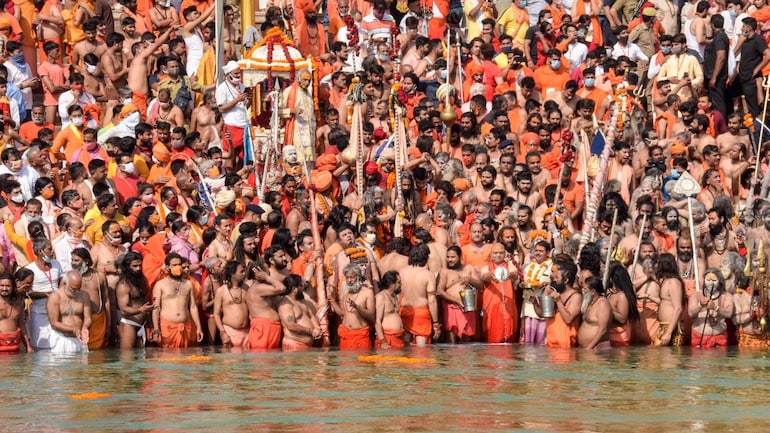 The Kumbh Mela is one the biggest religious gatherings in the world that is celebrated in India, in a cycle of approximately 12 years. In December 2017 UNESCO had included the event in its list of intangible Culture Heritage of Humanity.

As per Hindu mythology, there was a time where the Gods were stripped of their powers so they agreed with the demons to churn the primordial ocean of milk to form “Amrit” which is the nectar of immortality. As a result, a fight ensued between the groups over the Amrit as everyone wanted to consume it and become immortal. Because of this Lord Vishnu sent his carrier a celestial bird named Garuda, who flew away with the Kumbh of Amrit.  The word “Kumbh” means a pot and the word “Mela” means fair. Therefore, Kumbh Mela means ‘Celebration of the Pot (of Amrit)’. It is believed that during Garuda’s flight it dropped some Amrit, at 4 places on Earth. The 4 places are Haridwar, Ujjain, Nashik and Prayagraj. The Kumbh Mela is celebrated on the banks of Ganga in Haridwar, Godavari in Nashik, Shipra in Ujjain and the confluence of Ganga, Yamuna and mythical river Sarasvati in Prayagraj. The places are considered as the 4 sacred cities in India.

There are many religious rituals that are performed here. A ritual bath or a holy dip at a predetermined time and place is the major event of the Kumbh, which is called the Shahi Snan. It is believed that during this time the water at the rivers in these 4 scared cities turns into purifying nectar allowing the devotees to cleanse their souls and attain moksha and end the cycle of birth and death as they bathe. The exact dates and times of the Kumbh Mela are decided via astrological predictions and religious consideration.

Another important significance to note about the Kumbh is the Naga Sadhus. The Naga Sadhus are Shaivites, the followers of Shiva, who live in the Himalayas. The Kumbh Mela is the only time in the year when they come down to the plains and it’s therefore, an occasion of great significance for them. The Naga Sadhus have given up all the pleasures and desires of the world in order to lead a difficult life of penance. They don’t believe in wearing clothes and can be seen walking naked in the Kumbh Mela.

This year the Kumbh is being celebrated after an auspicious 11 years, not 12, in Haridwar because of specific auspicious dates.  Despite the COVID-19 Pandemic, the state is expecting about 10 lakh people on regular days and on auspicious days about 50 lakh people.