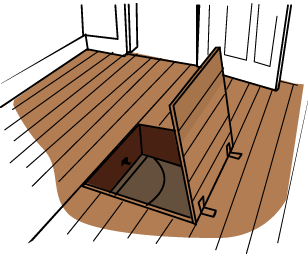 One sunny afternoon in Cornwall, when the jewel-blue Cornish Sea was crystal clear and the sky was flooded with the golden rays of the sunlight, a skinny tanned boy with blonde hair and startling jewel-blue eyes was standing on top of a cliff, little knowing about the adventure he was about to stumble upon.

Mike spotted a curiously shaped shell on the beach below. He climbed down and sped off to where he had seen the shell. He pocketed it. Then he noticed something queer. There was something hard on the ground. It was a trapdoor painted peach to camouflage it with the sand! He forced it open and saw a black hole with a ladder eyeing to gobble him up. Mike stepped down the ladder gingerly. He was in a large cave. It was furnished with archaic paintings and there were many statues made of gold. There was a passage and when he reached the end, he came across another cave. Inside, there were two men. Suddenly they spotted Mike. After staring at him, open-mouthed for some time, they came to their senses and caught hold of a scared Mike and dragged him roughly to the corner of the cave and tied his ankles and wrists tightly with a thick strong rope. After useless attempts to get something out of Mike, they ignored him. After listening to their talks, he realised that the priceless statues and paintings were stolen from temples and would be smuggled to another country. This was the perfect place to hide them as it was an area with very few inhabitants. Then when they were about to leave for some fresh air, a pocket knife fell from one of the man’s pocket. He didn’t even realise it. When they left, Mike got an idea. He twisted and turned till he reached the knife and picked the knife. Then, after many attempts, he cut the ropes and fled.

After reaching the trapdoor, he went up and ran at top speed to his uncle’s house and told him everything. He called the police and the men were caught, all thanks to Mike!