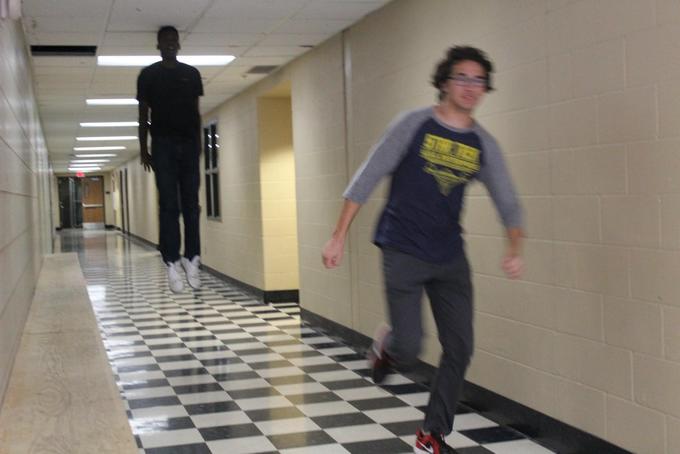 ‘Bang bang’. The sound echoed through the hall. Rahul found himself lying on the floor. It was his school, but completely disoriented. Few lights were shattered, lockers broken and he was alone. Then a voice from the speakers said, ’Code red, code red. Active shooter on-site, we are on lockdown. I repeat code red.’ Rahul was petrified and did not know what to do. He stood up and began dusting his t-shirt, when he saw from the corner of his eye, a shadow run across a corridor. When he looked behind him, it was gone. Rahul tried running down the hall, to find a classroom to hide in, when the shadow ran across the corridor again and finally stood behind him. It had blood-red eyes and no legs, torso or arms. He began screaming and ran down the hall till he found a classroom.

On looking through the small window in the door, he saw a teacher conducting a physics lecture. All seemed normal, the teacher was writing notes on the board, students were wearing lab coats and nobody was hidden under their desk. Rahul tried opening the door, but he couldn’t. It was very heavy. He began banging on the door. The teacher noticed him and immediately ran towards the door. He locked it and urged all the students to hide under their desks while he made a phone call. He began pounding on the door asking the teacher to open it. Rahul was losing all hope and ran to another classroom. This time, the teacher was conducting a geography class, there was a globe near her and the students sat at their desks. He tried opening the door but it did not move. One boy noticed Rahul and told the teacher that someone was outside the door. When she looked out, her face turned pale and she began screaming while she ran to the door. She locked it and ran to get a cane to protect the students and herself. At this point he had lost all hope. When he turned around, he again saw the shadow. It darted from one side of the corridor to the other and finally stopped in front of Rahul.

He again began shrieking while he ran to another classroom. This time it was the History classroom. A teacher sat at a table while the students wrote notes. Rahul was petrified when he noticed that the history and geography teachers had the same face. He knew it was not the same class as the students were different and there were no twin teachers in the school. He began banging on the door again as he could not open it again. The teacher did not notice anything nor did the students, and she continued her lecture. At this point, Rahul began crying and pleading to open the door. Finally, the teacher and the students turned their head towards Rahul. All their faces turned grey and their eyes were purple. In a creepy tone, the teacher said, ”Yes, who is this?” She had a spine chilling smile. Rahul did not bother to answer and ran down the hall.

Out of nowhere, two men appeared. There were wearing a tuxedo suit and black sunglasses. One of them had a syringe in his hand with a weird green liquid and the other had a gun. When the men began approaching Rahul, he knew what was going to happen. He ran down the corridor while screaming that he needed help. He ran into the cafeteria where he found a dead end. The men had entered the cafeteria. Rahul headed into the kitchen to run out through the back door, but then the black shadow came in front of him. It formed a huge circle around Rahul. The men entered it. He begged them to let him go and began sobbing. One of the men caught hold of his arm while the other injected the syringe into Rahul’s arm and he became unconscious.

On gaining consciousness, Rahul found himself lying on a bed in a hospital. His mother and a doctor were by his side. The black shadow and the men were not there. The doctor told him that he had fallen down the stairs of his school and had become unconscious. “He’ll be alright in a week’s time.”, said the doctor and left the room. Out of the blue, his mother disappeared. The lights turned dim and the walls turned pale green. The black shadow appeared in front of Rahul and sat on the bed. Then the two men entered the room and Rahul became unconscious again.