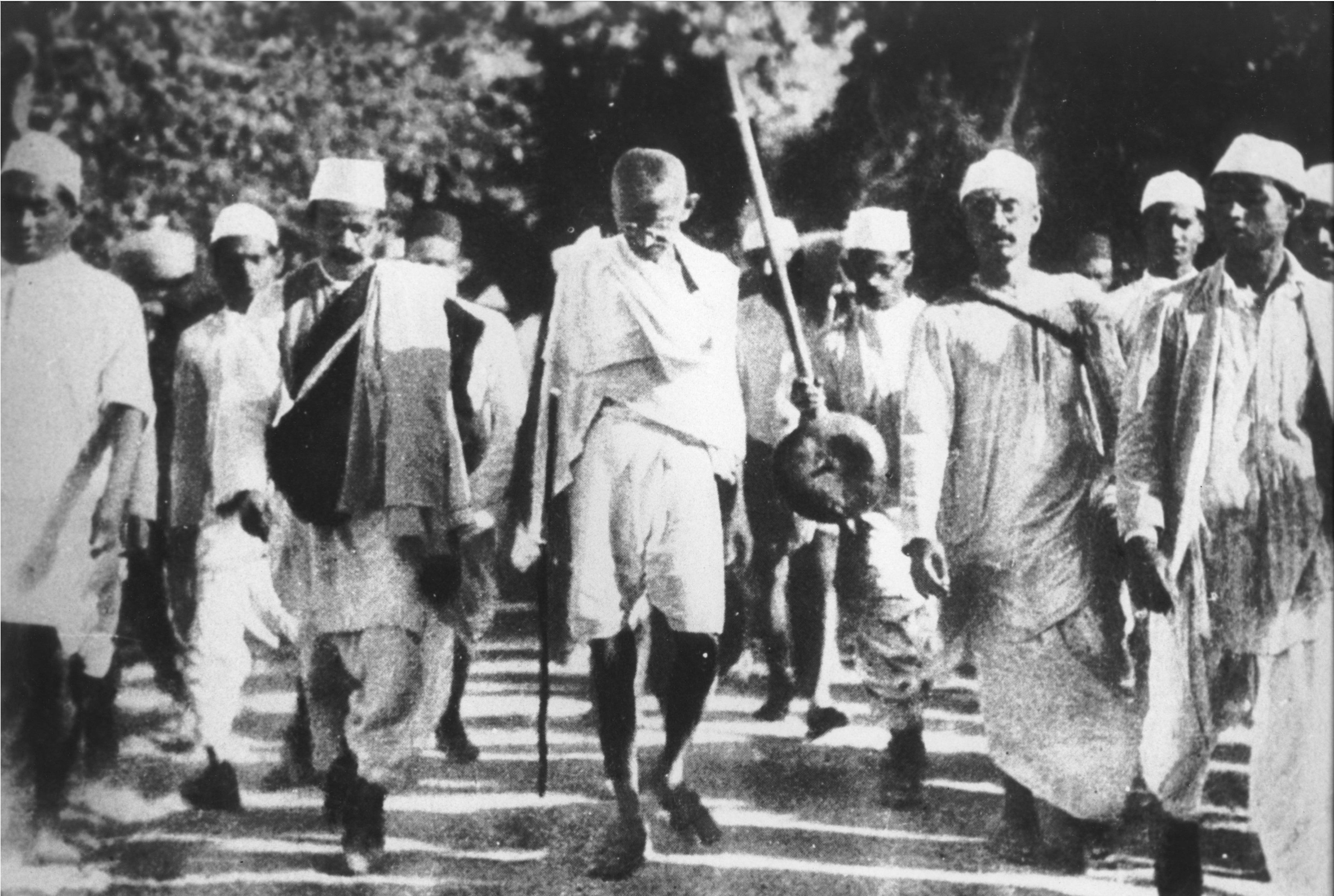 In 1915, Mahatma Gandhi came back to India from South Africa, where he had been fighting for Indian rights. In South Africa, he came up with his method of Satyagraha. ‘Satya’ means truth and ‘Agraha’ means demand. A Satyagrahi was one who fought on the side of truth. They hated evil but not the evil-doer. Through only peaceful means and honesty, the aim of satyagraha was to enlighten the enemy by showing them the right path. Gandhi wanted to spread his belief in Satyagraha throughout India too.

Fast forward to February 1919 and the British Raj passed the Rowlatt Act, which curbed many of the rights of the Indian population. In retaliation some Punjabi leaders rose in protest. They were quickly arrested. To protest for their arrest, many people gathered in Jallianwala Bagh in Amritsar on April 13, 1919. This was explicitly against the orders of the military commander of Amritsar, General Dyre. He marched troops into the garden and ordered them to open fire on the peaceful protesters. They kept firing until they ran out of ammunition. Around 400 people were killed and 1000 injured. This was a horrific act of violence and the Indian population was shocked at the heartlessness of the British. Gandhi said that there was no way they could continue a line of discourse with the ‘satanic’ British Raj who had shown their true colours after this ‘sin’.

In response, the Congress launched the Non-cooperation Movement, designed to bring a halt to the functioning of the government. The Non-cooperation Movement was launched in 1920 and continued till 1922. As part of the movement, Gandhi encouraged people to become more Swadeshi by using the charkha and spinning their own khadi at home. He encouraged people to get rid of their foreign clothes like caps, suits and ties and foreign items were burned. People continued to boycott government institutions like schools, colleges and courts. Clerks and other government workers resigned from their positions and everyone joined the freedom struggle. Shops selling liquor and foreign goods were picketed. Peaceful protests and hartals continued across the country. The Non-cooperation Movement was the first truly mass movement where hundreds of thousands of people came together in protest again the village. Despite beatings by the police and the government, people persevered in their quest for Swaraj.

In parallel, the Congress was involved in the Khilafat Movement as well which was led by brothers Maulana Shaukat Ali and Maulana Mohammad Ali. After World War I, the Ottoman Empire in Turkey fell and their sultan was poorly treated by the British and French. He was the Caliph (head of all Muslims in the world) and was stripped of this title. Muslims across the world were unhappy at this and the anger in India came out in the form of the Khilafat Movement. Gandhi and the Congress supported it to bring more Muslims involved in the freedom struggle. Eventually the Khilafat Movement and the Non-cooperation Movement merged into one.

In 1922, one of the protests took a violent turn with a police station in Chauri Chaura being burned down where 22 policemen were killed. Gandhi immediately called of the movement because he did not want any violence what-so-ever. The movement despite not being a success, united the masses and brought together Hindus and Muslims like never before. Gandhi became very well-respected freedom fighter and people looked up to him like a father.

A few years later, in 1928, the Simon Commission came to India to decide on the fate of the country. What was astonishing was that the Simon Commission had no Indian on it and the people could not believe that a group of foreigners were going to decide their fate. Motilal Nehru, a leader in the Congress wanted to wait sometime and see if the commission came up with an offer for Dominion Status (this would mean that India had autonomous rule but would be considered a dominion of the British). Younger and fiery leaders like Jawaharlal Nehru, Motilal’s son, believed that Swaraj was the only way, the Indian people could get complete autonomy. To please both sides, Gandhi decided to wait for a year and see if they got an offer of Dominion Status. If not, the Congress would push only for Swaraj.

And so, a year passed and as expected, nothing happened. On 26th January, 1930 the Congress passed the resolution of attaining only Swaraj. From that day on 26th January was celebrated as Independence Day across the country when people waved the tri-colour.

Through the next few months, Gandhi spent a lot of time thinking. The movement to be launched was very similar to the Non-cooperation Movement except that this time the Indian population also broke unreasonable laws implemented by the British. Gandhi wanted to find one such law to break where every single person was affected from the richest industrial to the poorest beggar on the street.

He found the Salt Tax. The Salt Tax, despite being trivial was the most despised tax in the country which every single person had to pay. Salt was an article as important as water without which humans could not survive. The British held a monopoly on the entire salt industry and no one was allowed to manufacture or sell salt apart from the government. Gandhi described the Salt Tax as being inhumane and unjust where the maimed, helpless and the poorest of the poor were forced to pay money to the government. It was the government’s way of extracting money from the population. The law stated that even you picked a grain of salt on the beach, you could be fined. And so, Gandhi decided to do exactly that.

Mahatma Gandhi understood the value of publicity very well. Before launching the campaign, he wrote a long letter to Lord Irwin, Viceroy of India at the time beginning with the phrase, ‘My Dear Friend…’. The letter listed demands which Gandhi wanted and if these demands were not met a Salt Satyagraha would be launched. The demands included cutting the land tax by half, prohibiting the sale of alcohol, promoting Indian businesses, boosting the Indian economy and a few more. Gandhi went on to write, in excruciating detail, of how a march from his Ashram to Dandi would take place in the effort of making salt. Soon the entire population knew of Gandhi’s plan but most were puzzled at how a simple commodity like salt could make a change. Leaders in the Congress and British officials laughed at this plan dismissing it as being stupid and not meaningful. Salt was so trivial a commodity that no one would risk their lives for it. However, what people did not realise was the Gandhi was not just manufacturing salt, he was manufacturing disobedience.

And on 12th March, 1930, Mahatma Gandhi along with 78 other followers left Sabarmati Ashram for the coast village of Dandi. These 78 followers were very well chosen. They represented different sections of society from different regions and religions. Gandhi had planned out the entire route they were going to take with a precise timeline of how many kilometres they were supposed to cover and where they should reach by the end of each day. At the villages they were stopping, Gandhi made it very clear that they would not have much food, just boiled vegetables. As they walked, people sang bhajans and patriotic songs. In the villages they stopped, people put leaves on the path they were walking and women sat on the footpaths spinning the charkha. Thousands of people joined the march and eventually fifty thousand people were marching to Dandi. The Dandi March gained world-wide attention as international newspapers like the New York Times and the Washington Post covered this historic feat. The half-naked fakir was leading so many people to make salt. People were waiting for the party to reach Dandi and see what Irwin would do.

Till then, Gandhi and his followers had not broken any laws and the British had no grounds to arrest them. Finally, when they reached Dandi, Gandhi took a fistful of sand in his hands and showed to it the audience. It was a symbol of defiance, a symbol of courage and a symbol of upliftment for the Indians. The Dandi March was the single biggest event which changed the course of India’s future. The movement to follow was called the Civil Disobedience Movement where along with boycotting British goods and services, people across India also broke laws by not paying taxes. The unique part of this movement was the role of women. Sarojini Naidu led thousands of women to make their own salt on beaches. People started boiling seawater in kettles and selling it. Most of this salt was unusable, but there was a different kind of joy in breaking the law.

By this time, most of the Indian population was involved in the freedom struggle and Gandhi had successfully made the Indian Independence Movement, a mass movement. In 1939, World War II broke out. India, being a British colony, was a target for Japan. Japan had brutally invaded China and had reached the eastern border of India. In 1942, Mahatma Gandhi made a fiery speech by expressing his concerns and saying that India needed freedom urgently. He made the call to ‘Do or Die’. Soon after, Gandhi and important leaders of the Congress were arrested. This started the Quit India Movement.

Despite the arrest of these leaders, the Quit India Movement continued with almost every single person protesting and asking the British to ‘Quit India’. The British brutally suppressed the movement with shooting protestors and charging with lathis. The movement was quickly suppressed but it sent a very powerful message across. The India population was strong and would do anything to get the British out of their country. Despite not having any active leaders the population came together. The British realised that it was just a matter of time before they would be forced to leave.

Soon after World War II ended, and the Muslim League and the Congress came to discussions on the partition of India. The partition saw so much bad blood between Hindus and Muslims, with violence ensuing across the borders of Punjab and Bengal. India and Pakistan had become independent and since then, India has grown to become the largest ever democracy.