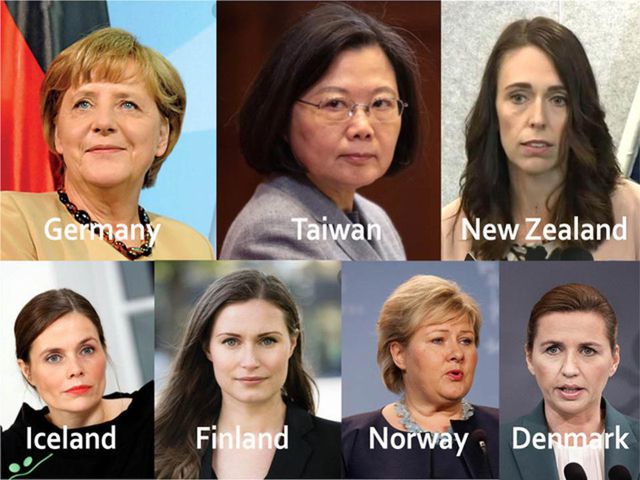 Women around the world are getting the recognition, power and appreciation they deserve for making this planet a better place to live in. People have begun to appreciate the amount a woman can do for her country and the world. I derive immense inspiration from powerful women who are leading from the front in our fights against various issues.

Looking at this COVID 19-struck world, there is one thing common with the countries who had some of the best responses at the initial stages. From New Zealand to Norway, from Taiwan to Denmark, from Iceland to Finland to Germany, all of them had female leaders. New Zealand had Jacinda Arden, Germany had Angela Merkel, Norway had Erna Solberg and Finland had it’s youngest Prime Minister in the world, Sanna Marin. All of them were quick to impose rules in their countries and got pretty good responses from their citizens. They showed incredible amounts of courage and faced the truth of the situation early on, and their results showed accordingly.

So, what were they doing in their countries? Well, they took up the situation and treated it in their style.

Angela Merkel, Chancellor of Germany, who is serving her 4th term as Chancellor, went with the path of truth. She was upfront about the situation and spoke very seriously to her fellow Germans. She calmly announced that 70% of the population will have to deal with it and that they will simply have to move on. “It’s serious,” she said, “take it seriously.” And that is how her country responded. Testing began right at the beginning, as did quarantine and isolation, and the result was that Germany’s number of cases and deaths were much lower than their European neighbours in the initial stages.

Leaders Tsai Ing-wen in Taiwan and Jacinda Arden in New Zealand decided to start early. Tsai implemented 124 ways to keep the virus at bay, without having to resort to lockdown. Her country responded accordingly and they kept the virus from spreading As of 4th September, the cases are still in the five hundred. Jacinda Arden implemented lockdown and quarantine, along with border closures long before the other countries. This helped New Zealand become the first country to report zero active cases. Currently, their cases have also been kept low. These two leaders chose to take the decisive route of handling things.

Iceland Prime Minister Katrín Jakobsdóttir offered free COVID tests for all its citizens and imposed an excellent tracking and checking system. While other countries restricted their testing to people showing symptoms, the Iceland government offered to test for all. Likewise, the Finland Prime Minister, Sanna Marin, took to social media to spread awareness, preferring to take the tech route. She became a millennial leader who spearheaded awareness campaigns with the help of social media influencers. To cater to the fact that not everyone reads newspapers, or watches the news, she called out to anyone willing to spread fact-based information. And Finland’s education system is still considered one of the best in the world. Admittedly, the population of these two countries is small, but it was still a great effort put by their leaders.

Norway’s Prime Minister, Erna Solberg, had a new, innovative idea to both spread awareness and make sure that the children of her country felt more comfortable with the situation. She arranged for a kids-only press conference, where she addressed the questions of the children, assuring them that it will pass over, that it was ok to feel scared, and spent the time calmly explaining the situation to them and taking their questions. She chose the path of affection and love.

These women have stood strong during this unpredictable and admittedly boring time of life. Yet, they managed to keep their country running in this terrible pandemic. What they have done for their countries is not only sensational, it is inspirational. The work I do is not as powerful as these amazing women, but I hope that one day, I will be able to do something for my country, India, like these outstanding, bold and fearless women have done.