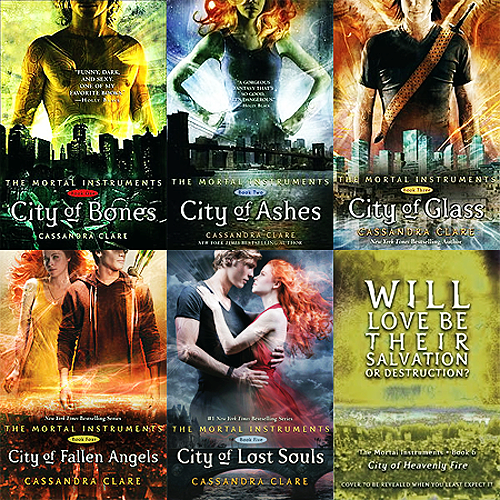 Sorry, kid. Wrong word. You mean hollow, because that’s what you feel after you finish reading this series. Today we traverse through Faerie, speak but don’t with the Silent Brothers, stab demons and turn into vampires, as we explore the foundation of the Shadowhunter Chronicles by Cassandra Clare, the Mortal Instruments series.

The series is based on the angelic race of Shadowhunters, people descended from the Angel Raziel, born and destined to kill demons. Our protagonist, Clarissa Fray, finds herself to be one of them and continues on adventures with fellow Shadowhunters Jace Wayland Christopher Morgenstern Lightwood Herondale (don’t ask), Alec Lightwood and Isabelle Lightwood. Yay! Let’s fight demons!

They meet Magnus Bane, High Warlock of Brooklyn, who aids them in their quest to retrieve the Mortal Instruments, three objects are given to Jonathan Shadowhunter, the first Shadowhunter, by the Angel, to protect them from demons, while they also try to battle Valentine Morgenstern, who just happens to be Clary’s father and has raised Jace as his own son. Great. Just great.

The third book is centered around the Mortal War, the battle between Valentine and the Clave, the whole contingent of Shadowhunters across the globe, because Valentine is a bigot and didn’t like the methods of the Clave. What an idiot.

The books continue the legacy of Cassandra Clare with City of Lost Souls, the fourth book. With a new villain, Clary and friends race to save the planet from Clary’s psycho brother. Give ’em a break, Cassie.

The series carry on with Clary learning to be a better Shadowhunter, about their history, and how their father destroyed their life before they were born. I can’t believe Valentine was ever associated with Cupid. Ugh.

This series is surrounded by mystique, fantasy, darkness and that teensy bit of romance that seems to creep into every single book ever. It is very well written, with sentences that break and mend your heart all at once. As I said, hollow.

Cassandra Clare is oftentimes known as the Queen of Fantasy because of this series, and I believe she earned that title. One of the best series I have ever read.