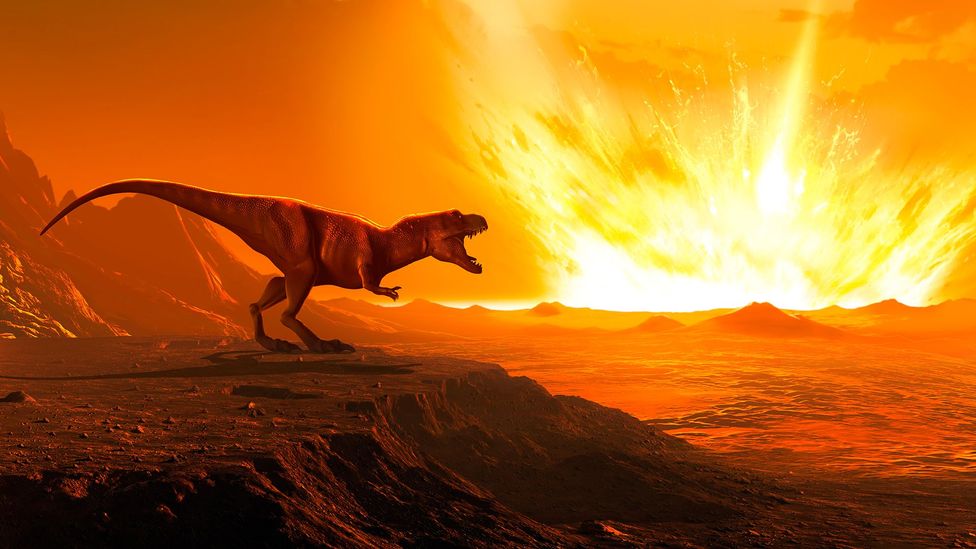 When I was four years old, I was engrossed in a book about Dinosaurs. I have a friend who used to live in Mumbai. Some can call us the Dino nerds, some can call us the best of friends. However, he shifted to Delhi and my love for dinosaurs started to fade away. Little did I know, my brother had developed a love for Dinosaurs; this kept me encouraged and motivated. And now, I love Dinosaurs as I used to 7 years ago.

I have often wondered, how did the dinosaurs really die? At first, I believed the famous meteor crash. However, I soon realised, as I got older that other theories exist too and there is no final call yet.

About 165 million years ago Dinosaurs, big and small, inhabited the vast plains, the rough seas, the steep mountains, the rainforests and the dry deserts. The Dinosaur age or the Mesozoic era saw three main important time periods –

It was the Cretaceous period (65 million years ago) in which all the dinosaurs died out and only their ancestors remained. Now, many scientists and palaeontologists often debate the cause of this mass extinction. None have been able to come to a conclusion. However, the most famous cause that was agreed upon, but still cannot be proved, is the meteor strike on earth approximately 65 million years ago. To further understand what exactly is the debate about, I have done extensive research and have gathered possible theories assumed by prolific scientists/palaeontologists or genius visionaries in many fields.

Here is my research converted into brief possible explanations that define the extinction of the Dinosaurs.

The Alvarez hypothesis, a theory formulated by American scientists, Walter and Luis Alveraz suggested that a meteor, as big as San Francisco and faster than a bullet, crashed into the earth’s crust causing many tsunamis and a mix of dirt and debris around it. This significantly triggered the extinction of dinosaurs. To make this theory widely accepted the father and son duo had to have evidence to prove their theory. Fortunately, they came with a lot of evidence. Through extensive research and investigation, they found out that the presence of a very rare element, that is hardly found on earth, had been discovered near some dinosaur bone sites. The element, known as Iridium, came from a common source that was not naturally occuring on Earth.

This so-called “common source” would have been most likely a meteor of some kind. To further prove their hypothesis, the discovery of the Chicxulub crater in Mexico, a 180-kilometer-wide, 20-kilometer-deep impact crater answered the question of many critics: If a meteor impact killed the dinosaurs, where’s the crater?

The second explanation that could explicate the extinction would be a large amount of volcanic rock, found in India, known as the Deccan traps. The theory suggested that a series of volcanic eruptions contributed to the death of these large reptiles.

To further prove their point, the scientists said that the smoke from these eruptions would have caused dinosaurs to have trouble breathing, and plant life (essential to herbivores) would have died out. However, this suggested proposition was weakened due to the finding of the Chicxulub crater (mentioned in the Alvarez hypothesis). Consequently, this theory was ruled out by a majority of scientists.

The 3rd possible explanation has been formed by not only scientists and palaeontologists, but also prolific personalities in various other fields ranging from Forensics to Archeology. Their conclusion suggests that a majority of dinosaurs died by battling each other in the search of food after a major plague took place. Most battles would have consisted of 2 – 3 dinosaurs that could be carnivorous (meat-eater) and herbivorous (plant-eater). Their claim was supported by an adequate amount of evidence.

Over the following years, dinosaur bones were discovered in ways that depicted that they had been killed or attacked and that would have caused the extinction of many dinosaurs. Now, this 3rd theory hasn’t been ruled out yet, but it is not widely known and people are still unaware of it.

These three theories make sense and have evidence to support them. In most cases, they come from a wide range of experts in many fields. As mentioned before, the volcanic eruptions can be ruled out. Therefore, the only 2 remaining theories are Dinosaur Battles and The Alvarez Hypothesis. Both of them make sense and have been proved by people who are aware of it. So we really can’t say which one is true.

On the other hand, surprisingly, there are sources suggesting 2 theories. Read the below paragraph to understand a different point of view that came out of nowhere.

Many people have the assumption of only having one theory. Subsequently, this has been turned down by some science critics. Their question is “why can’t there be 2 theories, and what if the meteor crashed, and that caused dinosaurs to fight for food”. The dinosaur battles would have explained the missing bones of many dinosaurs found together in groups. Also it would support the fact that the asteroid caused dust and debris and that immediately affected the plants. This phenomenon, indirectly, would have affected the animals.

People are starting to really accept this theory too and it is becoming widely famous among the public.

Here are some questions to keep you thinking:

I am in favour of both the theories that remain. Why? Well, because I think that they have evidence that can be seen physically and are straightforward. Also, they have been interestingly proved and their critics are forced to believe them.