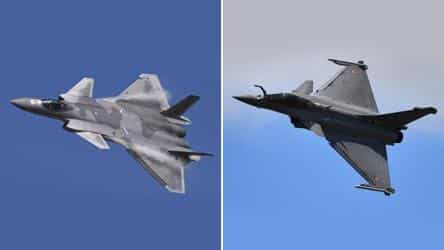 Amidst the rising tensions between India and China, the Indian citizens had their moments of pride which also gave them a sense of security. Yes, they had come! On July 29th, 2020, 5 Dassault Rafales came roaring down on the Ambala international airport, displaying their full splendor and glory. They were escorted by 2 Sukhoi SU 30s and received a water gun salute. Every Indian was proud at that moment and the arrival of these amazing and extremely capable planes has shown India’s development from a poor, divided country to a strong and efficient country. I remember my father dancing and singing, “They have come!! Hooray!!” I couldn’t live in peace that day!!

Our former air chief Birender Singh Dhanoa released a statement at the arrival of the jets that stated that the Chinese J20 didn’t even come close to the Rafales. Even before the arrival of the jets, the comparison between these two beasts was a hot topic viewing the recent tensions between India and China. But exactly, how do these 2 jets compare? Which is stronger than the other? In today’s article, this is what I will look at – The French Dassault Rafales vs the Chinese Chengdu J20.

The  Rafale is a French twin-engine, canard delta wing, multirole fighter aircraft designed and built by Dassault Aviation. Its equipped with a wide range of weapons, and it can perform interdiction, aerial reconnaissance, ground support, in-depth strike, anti-ship strike and nuclear deterrence missions. The Rafale is an “omnirole” aircraft as described by Dassault. The Rafale is a fearsome plane and is regarded as one of the best planes worldwide. It is often compared to the world’s best aircraft – the Lockheed Martin F-22. The Rafale is refered to as a 4.5 Generation Aircraft and has many features. It has been used in various battles and is a reliable fighter. As of 2019, 201 Rafales has been manufactured by Dassault. To know more you can check this article: https://mypenmyfriend.com/the-rafale-fighter-jets-a-complete-breakdown/

The J-20 made its maiden flight on 11 January 2011 and was officially revealed at the 2016 China International Aviation & Aerospace Exhibition. The aircraft entered service in March 2017. The J20 is referred to be a 5thGeneration fighter. A fifth-generation fighter is basically a fighter that has stealth capability i.e. one that can pass radar undetected or with a very weak signal. Little is known about the J20 since the Chinese government has not divulged much about it. Many pundits believe that some Chinese claims on this fighter is fake and it only looks good on paper. The J20 has no combat experience and no one but the Chinese Government knows of the extent of its capabilities. As of 2019, 50 J20s has been manufactured by Chengdu.

Now, the part you were waiting! – The Comparison!

In our comparison we will cover a wide range of topics such as Service Ceiling, Speed, Armaments, and a whole lot more! The comparison is presented in tabular form as below:

The Rafale fighter jets are reliable and have been proven throughout combat operations in various countries. This is one of the main reasons why it looks such an attractive plane to have in one’s air force. It is cheap, has state of the art weapons and has some stealth capabilities.

The J20 on the other hand has not been tested in any combat. Thus, it is hard to say about the plane’s capabilities and how it truly acts in combat experience. Everyone in the world is interested to see how the J20 performs in war.

So, who wins this match? Well, hard to say. I am inclined towards the Rafale since its low cost and many advanced features. Also, the J20 only looks good on paper and has not yet shown its mettle. But, if you look at the other side, due to the lack of information on the J20, we don’t know its strength and weaknesses. Who knows? It might come out to be the best plane in the world! In fact, some military strategists believe that the J20 is better than the F-22 Raptor and the F-35 while others roll their eyes on such a ridiculous claim.

Besides, there are loads of other factors other than military hardware. Pilots are one. It really depends on the pilot and his awareness and knowledge that can win an air war. The best pilots can usually change the tide of the events and banish the enemy. I would prefer an experienced and amazing pilot with a bad piece of military hardware rather than a bad, inexperienced pilot with say, the F – 22. This is because the more experienced pilot knows what he is doing. Tactics and shrewdness also come in the way. So, there are lots of other factors that should be taken into account before we actually compare both these beasts. Most of all, these planes haven’t even come face to face with each other!!

Needless to say, even though I am eager for both these giants to encounter each other, I certainly don’t need 2 Diwalis in a year!!!