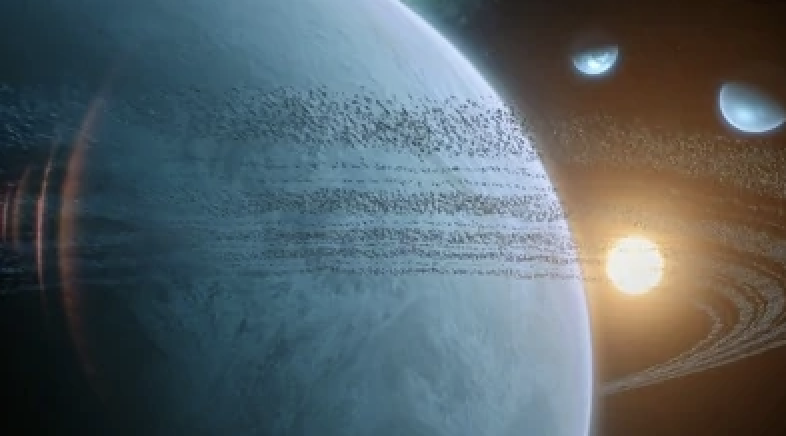 I went back to the control room and used the search engine to find Trenzalore. There was no trace of it anywhere nor could I find any reference to it. The curiosity was slowly but exponentially building up. I still had the napkin in my pocket, and for some reason, I decided to check it out. I took it to the lab onboard. The ship was a 2078-TSub Res-ship and had been exploring part of the Testrakn Galaxy but due to loss of equipment, we had to return to Gaktren.

On my way to the lab, I could see none of the crew and their life signals were not showing and that got me worried. There were only four of us and by the number of shots that I heard the Dalek take all of them should have been dead. I could not rescue them nor could their bodies be taken back as the cleaning system would have thrown them out into space. And at light speed there is no saying how back they were.

Once in the lab I had the AI lock all doors just to be sure that there was nothing on board with me. At this point in time, if anyone of them were alive they would have reached the control room and initiated emergency protocol or they would have taken the only smaller ship on board and left.

“This is Command. Gamma53 is there a problem? Over.”

“On-board Dalek invasion. The crew is dead and only I remain alive. Over.”

I then proceeded to initiate emergency protocol. I immediately turned my attention to the napkin. I ran a couple of tests on the structure and integrity of the fabric and then examining each and every fibre of its design. It was then that I realized that the napkin not only had the name of the place but that each fibre was a coordinate (now I can explain the coordinate dimensions thing but then that is all we would be talking about for millennia).

“Gamma53 to Command. Emergency protocol has been initiated. Over.”

“Command to Gamma53, do not leave the ship, and do not in any case lose contact. Do you have enough power for any teleports? Over.”

“Genesis how much power does the ship have?”

“Power remaining for hundred light years’ worth of travel, three warp drives, and one teleport.”

“Gamma53 to Command. No power for teleports. Over.”

That could get me into trouble but me being me still wanted to investigate the incident and find out more about The Doctor, so I did what they told me not to do.

No, no, no. Command will know.

I now proceeded back to the control room. I initiated warp drive to the coordinates in the fabric and the journey did not take long after that. The warp drive ended about a few light years away. From far away I could see that Trenzalore had a large number of rings. Trenzalore also had two moons. And Trenzalore was the only planet in its galaxy.

Trenzalore is what would give people the creeps. Trenzalore was a place of sadness, but it seemed to have a rich history because of the rubble floating in few of its atmospheres.  Trenzalore was dark, Trenzalore had a sense of peril, Trenzalore witnessed the death of ‘The Multitude’.

Go to The Multitude – Part 1