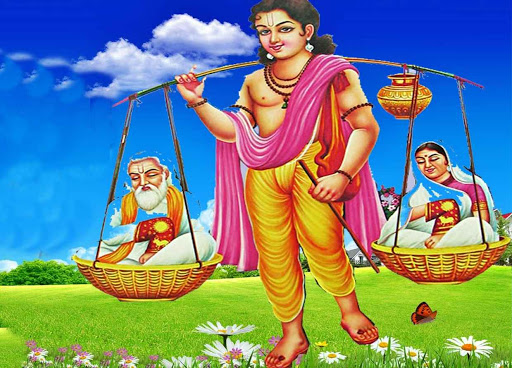 Once upon a time, there was a generous boy called Shravan Kumar. Both his mother and father were blind. This meant that he had to do all the chores and work, but he still loved and was devoted to his parents. One day his parents expressed their will to go on a pilgrimage in these last days. Shravan Kumar was determined to fulfil his parents’ wish. He built a carriage which consisted of two baskets tied by 3 ropes to a rod, which would be used to carry the baskets. He put his parents in the baskets, mother in one and father in the other, and held the rod on his shoulders. Then he went, with his parents, on a pilgrimage.

On the way, his parents wanted some water so Shravan Kumar stopped to fill a bucket of water for them from a river. At the same time, there was a King by the name of Dashrath hunting in the forest and when he heard the sound of water in the river he thought he had heard an animal so he shot an arrow. Unfortunately, it was not an animal but Shravan Kumar. The arrow hit Shravan Kumar and he was close to death.

When Dashrath realized what he had done he felt very sorry and asked Shravan Kumar what he could do to help ease the pain. In his last breaths, Shravan Kumar recited his story to Dahsrath and begged him to give his parents water. Dashrath filled up water and gave it to the blind parents. Then he told them what had happened and asked for forgiveness. On hearing what had happened both parents were full of sorrow and cursed Dashrath that he would also die because of the loss of a son. The parents then drowned themselves in the same river.

Moral: Always respect and care for your elders like Shravan Kumar and don’t be afraid to admit your mistakes like Dashrath.

A story derived from Hindu Mythology